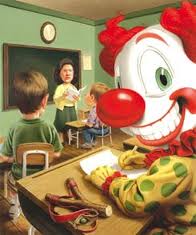 While you paid attention in class, while you turned in your homework, while you learned a work ethic while flipping burgers at McDonald's, the class clown was learning how to game the system.

While you were working hard at a career, working your way up the economic ladder, the class clown learned how to play the "victim" role and garner sympathy for his inability to read and write and for his "poor education".

While you were paying into Medicare and Social Security for your entire working life the class clown was laughing at your earnest efforts while drawing free Medicaid supported by the very funds you were contributing to a fund supposedly to be used by you in your old age.

While you were paying $1,000 dollars a month for a family health care plan the class clown was getting  free medical and dental care for nothing.  If you missed an appointment with your doctor you were penalized for a missed appointment while the class clown, by law, cannot be assessed any penalty under Medicaid.  He doesn't even have to pay a "co--pay".

While you were paying into Social Security, and are required to wait until you're 62 to draw a Social Security check, the class clown can draw $1,000 dollars a month from an SSI check because he's an "uneducated victim" and qualifies for a poverty handout.

When the economy turned bad you told your kids that you can't take them to McDonald's anymore while the class clown is issued a Food Stamp credit card that can be used to buy fast food...(and even cigarettes as we learned on the news this week!)

Remember that Medicare fund you contributed to?   Your President just took $500 billion from that fund to pay for free subsidized health care for the class clown...who was uneducated and too poor to put anything into the fund.

Remember that health care plan you earned through employment, or bought in the open market?  In 2014 your premiums are going to double or triple in order to pay for the class clown's health care plan.

So.....the next time your kids ask you about the class clown in their class, tell them "if you can't beat them, join them!"  Get that kid a big rubber nose and oversized shoes...he'll be set for life!
Posted by A Modest Scribler at 4:31 AM