"She Walks By Night" 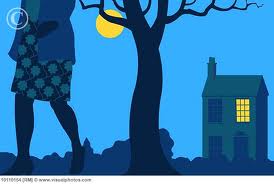 My mom's birthday comes up next week.  Every year around this date my memories of mom intensify, though she is ever-present in my mind always.  This morning I was reading the news and learned of another military casualty in Afghanistan.  I tried to imagine the sorrow of the young man's parents as the chaplain sat them down to bring them the terrible news.  It brought back memories of my mother's concern during my first tour in Vietnam.

At the time our little hometown had only 5,000 people but we seemed to suffer an inordinate number of casualties for such a small burg.  Our town had first erected a huge board in the local park that listed each town resident serving in Vietnam.  However, when President Johnson stepped up the war, when we had 565,000 Americans serving in Vietnam, even the big 12 foot by 12 foot sign was not large enough to accommodate all of the locals serving in the war.  They then replaced it to list only those who had died in Vietnam.  That sign turned into something of a horror for local mothers.  The names of boys who had just graduated from high school the previous year were now appearing on that sorrowful "death board".

My turn to go to Vietnam came five days before Christmas in 1968.  My big country family honored me by having a big Christmas dinner for me, knowing I would not be there with them that year, and having driven by that big "death board" dozens of times, were fearful that it might be my last Christmas.

Not long after my arrival in Vietnam I began to receive letters from family members, offering news from home, but also expressing their concern that my mother had become a "night walker".  It seems that my mother had begun a period of restlessness and regularly left the house in the late evening to take a walk in an effort to relieve her tensions.  I learned later that she was often stopped by patrolling police, curious as to why a woman would be walking the city streets so late at night.

When you're 20 years old you feel immortal.  Though I had several confrontations with the thoughts of not returning from Vietnam I was insulated somehow from that grim reality, as were most young men just concluding their second decade of life.  The incoming mortars and rockets seemed always destined to fall somewhere else.

But I look back now and I can more readily understand my mother's fears.  She knew so little about a war zone 10,000 miles away on the other side of the world.  But she drove by that "death board" daily and must have experienced great fear and worry for my safety.  Each night the evening news brought real world firefights into our living room as Satellite technology made the horrors of war all too real.  Each day the paper reported a list of war casualties.  Before we would be done with that war 55,000 American graves would be dug and half a million more would come home, limbs and minds lost in the madness of conflict.

Our current war is not reported on now as prominently as was the Vietnam War.  The current war is "old news" and Americans have now become accustomed to turning away from real news.  They are more enamored by what Tom and Katie are doing, what Justin Bieber is up to, or whether Miley is cool with the way things are going.  Americans today are more interested in the political war of words than the deathly conflict being waged in the mountains of Afghanistan.

But there are thousands of mothers even today walking the darkened streets of evening, worried for a loved one, fearful that their loved one might be coming home in a coffin, most often in the dark of night so as not to offend the sensibilities of those who might find the costs of war a bit too precious.

Thanks, mom.  Thanks for worrying...and for caring....and Happy Birthday.
Posted by A Modest Scribler at 7:52 AM