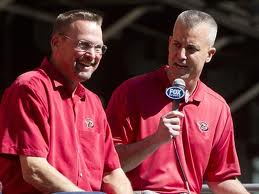 Last Spring of 2011 one of my blog entries was about how Daron Sutton drives me crazy.  I have to turn down the sound when watching Diamondbacks games because he irritates the hell out of me.  He speaks in a professorial tone, forego's contractions and sounds like one really bad history professor I once had.  Rather than an easy smile his countenance is always a furrowed brow as he first comes on the air and pontificates "he's Mark Grace and I'm Daron Sutton".    What's wrong with "Hi folks, Mark Grace and Daron Sutton here and we're coming to you from.....where the Diamondbacks are hoping to end a three game losing street at the hands of the weakest hitting team in baseball".

Sutton's professorial meanderings are not the worst of it.  In order to "spice up" the game he'll raise his voice to screachingingly loud decibels just to describe a routine double play.   If someone hits a home run Sutton's screams shake the TV speakers and has me running for the mute button.

But that's not my bitch today; my complaint today is that I write on a wide variety of subjects, some political, some personal, and some on a great diversity of subjects.  Yet, my Sutton blog, written over a year ago, continues to accumulate viral level page views and now ranks as the 5th largest page view count in the 18 month history of my blog.  Why?  Because the Diamondback back office is keeping a tight lid on why ole Daron has been suspended.

Derrick Hall; please come clean.  If it wasn't Sutton's reluctance to wear the Sedona Red shirt that got him suspended, if it wasn't Sutton's weird criticism of you and the Upton matter, why don't you just come out and tell the Sutton fans what it was.  Perhaps then, I'll get fewer angry emails from the Sutton blog written eons ago.

I must admit though; I am greatly enjoying the conventional "game calling" being performed by Mr. Schulte.  Hell, he has even manage to curb some of Gracie's silliness.  Last night when Montero got hit in the toe by a sinking fastball Gracie spewed "call a toe (tow) truck!"  Greg Schulte graciously ignored the terrible pun and the game went on.  Thanks Greg.   :)

"Call a TOE truck"...I love that, what a great lousy joke, I'm still laughing.
Too bad about the lousy announcer. I love our guys, Krupe and Kuiper they call them over at the Giants. When NBC gets the play by play I can't listen, they are just terrible with the most inane, nonsensical chatter.

Ken, when I was growing up in Central California I rarely missed a Giants game. Russ Hodges and Lon Simmons were wonderful and brought the game right into my bedroom. The only greater one was and is Vin Scully.

Schulte is god-awful. Sutton and grace are the only thing that keeps me tuning in on a consistent basis when the team is playing this bad. I've watched maybe two full games since the Sutton suspension.

tnelly, thanks for visiting my blog and taking the time to comment. To each his own. Viva La Difference!

Schulte is horrible. Listening to him during Aaron hill's second cycle made me miss sutton even more. Gracie and sutton are hilarious together and they make it so much more bearable to watch the dbacks when they aren't doing so great.

Been watching dbacks play long time on DirecTV MLB extra innings... Sutton and Grace are magic together..... Whatever demons are being fought... Family and I want him back asap...