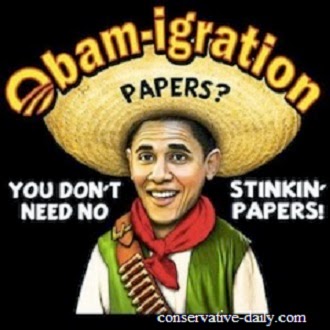 Spurred by Obama's royal edict to arbitrarily declare some two million illegal Mexicans "instant citizens" tens of thousands of illegal teens have crashed the border, hoping to get in on "microwave amnesty".  The "dreamers" now number in the millions as families as far away as 1800 miles, down in Central America are now dumping their "spermal refuse" on America's shores.  It's just more of those "unintended consequences" that a man-child unsuitable for leadership has wrought on our nation.

So last week America tired of seeing our borders overrun.  America was angered when Obama asked Congress to give him $1.4 billion to feed, educate and medicate even more potential "dreamers" and their anchor baby offal.  And they took it out on the nearest politician available...and they ousted the House Majority Leader who was a hair's breath away from cutting a grand amnesty bill with Obama.

America is getting damned tired of having an outlaw for President; trading terrorists for army deserters, circumventing Congress and the Constitution with his Executive Orders, refusing to enforce our immigration laws and declaring himself arbiter of all national concerns.

As bad as it has been, it promises to get worse.  Barack Obama has already promised that, if Congress won't give him authority to legalize 30 million illegal invaders, he'll do it himself.  He'll issue still another "emperor's edict" and utilize the full force of the military and the justice department to enforce his "own laws".

Well, folks, if that happens, if Obama declares America an open welcome mat for illegals already here, if his actions prompt tens of millions more to breech our border, it's time to brand Obama the outlaw that he is ....and take him out by any means necessary.  Whether Obama likes it or not, the Congress is the people's house, they are elected to do our bidding, and they won't approve amnesty because America does not want it.  No amount of executive orders will change that.

If our President does not want to respect and obey our laws there's no reason in the world for us to obey them either.   Impeach the bastard....and if that doesn't work, well, we know what to do with outlaws.

Our founding fathers were wise beyond their years. I imagine citizens will react accordingly, do we have any other choice?

such an ignorant society