Bill Clinton Has An Erection Lasting More Than Four Hours 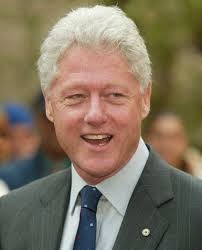 For six years I've read that the Clintons and the Obamas hate each other.  I've even heard it from liberal rags like The Huffington Post, The Washington Post and The Hill.  The Clintons and Obamas have had to do this kabuki dance with razor sharp knives, trying mightily not to clash in order to save their political ambitions.

Then, this week we learned that Slick Willie actually hated Obama so much for stealing Hillary's 2008 throne that he threw his allegiance to John McCain.  In his book "Clinton Inc" Daniel Halper writes about the long term enmity between the Clintons and Obama.  Halper writes that Bill Clinton initiated a series of calls to John McCain telling him how to defeat Barry.  McCain confirms the calls, relates that Clinton gave him campaign advice, but stops short of furnishing the details.  And these calls to McCain came even as Clinton was campaigning for Barack in the latter stages of the campaign...an effort he felt he had to make to keep Hillary's prospects viable with the liberal left and the Blacks.  Clinton was hoping like hell that McCain would win, which would open the door for Hillary in 2012.

What brought on all this hate for Obama?  Well, it all started in the North Carolina primary campaign in 2008 when Barack Obama played the race card for the first time...but this time it was against the Clintons.  Bill was so incensed by this he is quoted by friends as saying at the time "I hate that man...I hate that man more than any other man on earth!"  You see, Clinton has spent more than 20 years simpering to the Blacks, lamenting that he "felt their pain"....and Clinton was worshipped by Blacks!  That is, until Barack came along and tens of millions of Blacks said "ain't no matter...your skin is white and we'll go Black every time, no matter how much we loved you before."

The other Clinton expose that came out this month was Edward Klein's "Blood Feud" which also dishes the dirt on the Clinton-Obama battle for the heart of libtards everywhere.

So what is Bill doing lately?  Well, according to the latest Secret Service book expose, Bill has another bimbo who gives him what Hillary won't.  This from the New York Post:

(the post) got its hands on portions of a new book by Ronald Kessler called "The First Family Detail: Secret Service Agents Reveal the Hidden Lives of Presidents." The book describes the strict protocols agents follow when Energizer visits the Clinton's Chappaqua home while Hillary is away.
Kessler writes that Energizer sometimes arrives just minutes after Hillary leaves the home. The author quoted one Secret Service supervisor who said, "You don't stop her, you don't approach her, you just let her go in."
Hillary's Secret Service detail lets Bill's detail know when she is returning to the home so that there is time to get Energizer out the door and remove any evidence that she had been there, according to the book.
A Secret Service agent described the alleged mistress as wearing revealing clothing and having "enhanced" breasts. The agents also described the buxom blonde as friendly, saying she sometimes brought them cookies.
In the book, agents describe Hillary as being rude towards the Secret Service. "Agents consider being assigned to her detail a form of punishment," Kessler wrote.
It wouldn't be the first rumored affair for Bill. The Daily Mail notes that Clinton previously admitted to having an affair with model and actress Gennifer Flowers.
Other alleged mistresses include Dolly Kyle Browning and Elizbeth Ward Gracen, a former Miss America who claimed she had a one-night Stand with Clinton.
The Clinton's private lives and scandals past and present have come under new scrutiny as the 2016 presidential election looms closer. Hillary Clinton is widely speculated to be a leading Democratic candidate, though she has not officially announced a plan to run for office.

You see, Bill Clinton has a new lease on life.  No more need for Viagra cause Bill is thrilled that Obama's Presidency is spinning out of control.  This will give he and Hillary space to distance themselves from a man whom he hates with a passion.

And how does Hillary feel about all this?  Well, lets look at what she confided to her friends after leaving office:
"The thing with Obama is he can't be bothered, he's got his hands missing from the tiller half the time.  That's the story of the Obama Presidency - no hand on the fucking tiller".  She then went on to say "And you can't trust the motherfucker...he's treated Bill and I shabbily.  And we're angry....we tried to strike a deal with him..we supported him".....

That's all folks!  Just know that Bill won't be calling a doctor for that four hour plus erection; he's happy as hell these days!
Posted by A Modest Scribler at 2:00 AM

Hilary said, "he's treated Bill and I shabbily"???? Bill and I???
I somehow doubt that is an accurate quote. Other than than, yes we have our family feuds, pretty accurate story, I'm sure.

Jerry, it may not be an accurate quote but, if so, the error is not mine. I took it directly from the NY Post.

What all this needs is a good soap opera title."Where's Willy's Willie Now?" or "Horrible Hillarys Hateful Hubby" "Will Barry and Bill Become Butt Pirates?", please add if you think of any.

oh god, that's funny, Craig. I wish I had thought of that one; "Where's Willy's Willie now?"

Spinning out of control was the plan all along. Little does it matter to the Clintons' whatever happens. BHO is doing exactly as planned, two and a half more in his term, we aint see nothing yet. The smugness that these elites project cannot end well. I wish I was Alfred E Newman, "What? Me worry!"

Anon, I read speculation from the liberal left that Hillary might not run..nonsense...she lusts for that power more than anything in life.