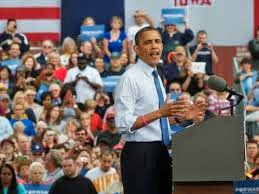 I don't believe I've ever seen an entire political party so inept at articulating a political philosophy like the current crop of Republicans.  With the exception of Trey Gowdy and Marco Rubio, Republicans are a bunch of tongue-tied idiots.

By contrast we've got a "man-child" President whose only saving grace is his brilliance in "shucking and jiving" that just delights his constituents.  His schtick?  Put a bunch of slobberingly devoted folks behind him, mount the stage and begin jiving with lies about what the real issues are.

Just a couple of weeks ago Obama, irate that the Supreme Court slapped him down on exceeding his authority as President, got up on stage and said he intends to keep using that pen and that phone to dictate how our history will unfold.  And he says such things as "they are suing me cause I'm doing my job when they won't do theirs!"

And it's working!  Congressional approval ratings have never been so low!  "A do-nothing Congress" the ignorant citizenry cry out!  And the House members are absolutely stupid!  They have made all the hard choices...the ones that hurt them politically, only to go to die in the Senate...so why keep pounding your heads against the wall?   Well, I'm damn glad this is a "do-nothing" Congress!  In fact, I want them to do a hell of a lot less!  I want them to develop a set of balls and begin squeezing Obama's purse strings!

For example, I don't want Congress to approve that $3.7 billion dollars to coddle the new wave of illegals!  Senator Tom Coburn ran the numbers and said "for $500 million dollars we could fly every one of these invaders back to their home country in First Class and save $3.2 billion instead of having  these illegals worm their way into our cities as they are now doing while ignoring those "15 days to appear in immigration court" notices and disappearing into the country.

And I want Congress to drastically cut Obama's travel budget.  He and Michelle have burned through hundreds of millions of dollars for luxury vacations and I want it stopped!  And I want Congress to impeach this bastard...for circumventing the Constitution and for gross corruption and massive government cover ups and stonewalling!

But where are these smooth talking Republicans who are capable of articulating the opposing view?  Other than Trey Gowdy, and occasionally Marco Rubio, the rest of the Republican party is comprised of mush mouth stumblers who are simply incapable of pointing out the "ridiculousness" of the Obama "jive and shuck" pony show that seems to be Obama's only talent!

This is like watching Jack Nicholson go nuclear in that old film "The Sterile Cuckoo".  You've got one crazy man running the insane asylum while everybody else stands around and just watches.  Except this is a country and Obama is the madman,  with seriously undeveloped adult skills, possibly mental problems, driving the rest of us nuts!

Speak up Republicans!  God Damn It!  Someone speak up!

"One Flew Over the Cuckoo's Nest"?
but we don't want a Nurse Ratchet either. We are on a Ship with Fools
a Country run by committee where our members of Congress are afraid. Both sides. If we really knew their views we wouldn't vote for them.
"None of the above" seems the best choice for now.

i'll hold my nose and vote Repub until a massively supported 3rd party that supports most of my views comes along...whenever that happens.