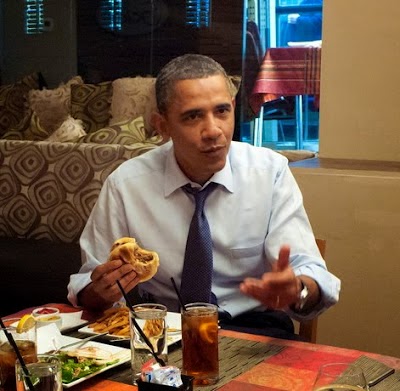 Today, as we heard the horrible news of Malaysian Air Shoot Down.  It brought back memories of 1983 when the Russians shot down the passenger liner Korean Air Lines 007.  That night President Reagan went on national television to address the nation.  In heart felt words Reagan honored the dead, including our fellow Americans, then set the stage for world wide condemnation of the Soviet Empire.

In September 2011, George W. Bush stood in the ashes of the World Trade Center and shouted through that bullhorn that the terrorist would soon hear from us.

On Wednesday afternoon military intelligence officials and the CIA briefed Obama that they had detected at least one BUK surface to air Soviet missile system that was moved from Russian into the Ukraine.  Apparently Barack was unphased.  No worldwide warning went out nor were our allies notified.

Instead, this morning Obama boarded Air Force One to fly to Delaware to make a speech about how nasty Republicans are.  While airborne he learned of the Malaysian Air shoot down.  The State Department called and advised him that Americans were on board that plane.  Upon arrival Obama did that "swing ape" descent from Air Force One, was driven to his speech event, climbed up on the stage and spent exactly 30 seconds by saying "we may have had a tragedy this morning".   He then spent the next hour castigating Republicans for giving him only $15 billion for roads and bridges and spoke of how nasty Republicans are for blocking everything he wants to do.

Obama then climbed down from the stage, shook hands with local officials and said "I'm hungry, let's go get a burger".  The photo op had been planned for days and neither the burnt corpses of Americans nor the other innocents could ruin Obama's appetite for both a photo op and a hamburger.

So there's another victim, apart from the Malaysian disaster; it is us.  We no longer have a leader with even the smallest measure of stature.  We no longer have a President who has a sense of time and place, or what a silly photo op might offer in the way of hurt, of American citizens, and certainly not for the families of those Americans who died in that horror.

Clueless comes to mind, but I believe it is callousness. The progressives know that their gig is up, every day the people experience another indignation from the feds. They are full throttle, reaction is very near. Pray for our Republic.

I agree, Anon. Every day Obama stuns me with his apathy and indifference and massive self love, without giving a thought to anything except what benefits him politically.

Worthless piece of shit! Bitch boy barry would have said more if there were any muslims or undocumented unaccompanied minors.Past sad into disgusting and disgraceful.

If anyone still wonders, character in leaders matters. A lack of character is glaring, as evidenced by the man the people chose (twice) to lead this nation. Nobody should be surprised at the petty nature of Obama, since his background is utterly devoid of any experiences that mold and shape true leaders. He never hid his intentions for this nation, and the MSM refused to accurately portray the candidate for what he was. Strength of character cannot be faked, imitated, or hidden: You have it or you don't. Obama doesn't and never will.

I don't know, Randy..I've seen some fake character, at least a few times. But Obama seems totally incapable of it! I'm always amazed at his consistent weakness.