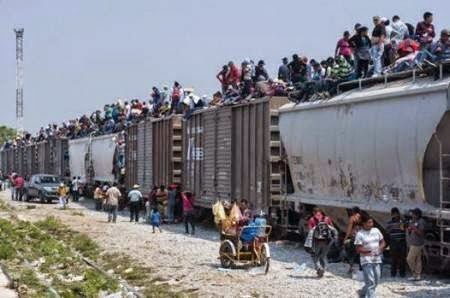 That $3.7 billion blank check that Obama has asked Congress to approve is in real jeopardy.  You remember this one.  Obama wants $3.7 billion to feed, house and medicate some 90,000 of the most recent border invaders.  Obama says he needs it  to hire immigration judges in order to hurry up and send those invaders home.

If you believe that you believe in Santa Claus and the Easter Bunny.  Obama will use every bit of that money, and more, coddling illegal aliens.  Today, (Tuesday) the Senate tried to pass a bill that knocks a billion off of Obama's "want" list but Democrats refused to vote to amend that 2008 law that was meant to prevent sex trafficking and not an open ticket for a few hundred thousand illegals to invade and be given access to this country.  Nope, says the Dems, you got to pay for them to have a lawyer, and you've got to give them plenty of time to prepare a defense, before you ever deport these poor souls.

The House, by contrast, wants to see a laundry list of what this $3.7 billion is to be used for.  They have also insisted that the 2008 law be changed BEFORE any money will be authorized to untangle the immigration mess on our border.

Folks, I've got some bad news for you here.  Obama is going to win this one.  Here's why.

Do you recall when Obama decried the total collapse of our nation if the government was shut down?  Do you remember when Obama cancelled White House tours for our nation's school kids?  Do you remember when The Anointed One, actually spent money to hang yellow crime tape around those open air war monuments...just to needlessly punish our citizens?

Well, get ready for a massive layoff of our border patrol!  Obama and his Homeland Security Chief are already screaming that Border Patrol funds will run out in the middle of August if Congress doesn't fork over that $3.7 billion.  Yes folks, Obama has been using Homeland Security and Border Patrol money to feed, house and medicate these invaders.  And how clever!  Now, when the money runs out Obama can blame the Congress for this mess, for not giving him all that extra cash!

How will it all play out?  Well, assuming Congressional Republicans stick to their guns, Obama will immediately begin blaming the invasion on Republicans.  He'll say he's doing all he can to staunch the invasion but is helpless without the funding to do so.   Yeah, the funds he misspent in June and July.

Then we'll see the Border Patrol parking their vehicles and being sent home until further notice.  And Americans will need only imagine a million Mexicans flowing across the border to put a scare in them.  And citizen apathy and ignorance and the Democrats uncanny talent for distorting the message will result in more pork flowing to Obama and to the illegal ilk camping all about our nation these days.

Sad.  Damned Sad....but that's the way the world works these days...the bad guys seem always to win.
Posted by A Modest Scribler at 2:00 AM

About the only thing the dumdocraps do not blame on Republicans is ...Could not think of anything.More state Governors need to send National Guard to guard our border.

Good example of the futility of the political system... Obama is a strong man masquerading as a President, using the E.O. to accomplish what Congress won't do. The destruction of our system of government has been accomplished in just over 6 years, aided an abetted by R's that are solely concerned with keeping their jobs. Amnesty (round 2) is mere months away. Aren't we a great country?