The Stunning Irony of "Operation Wetback" 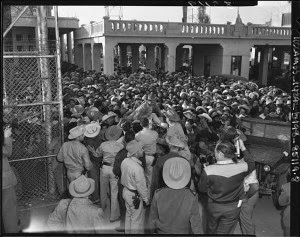 If you were to ever attend a university level course on the history of American immigration you would probably hear that federal government brownshirts rounded up a whole passel of Mexicans and deported them.
Partly true.  But if you had actually studied the history that led to Operation Wetback you would have learned that this Eisenhower era operation actually came about at the insistence of the Mexican government!  It seems that, as early as the early 1900's Mexican President Porfoio Diaz was complaining about the Mexican labor drain.  Needing native Mexicans to stay home and build the Mexican national infrastructure Diaz and every Mexican President for the next 50 years complained about Mexicans leaving the country to work in the United States.

What was especially devilish to the Mexican government was the U.S. Bracero program.  This allowed Mexican workers to come into the U.S. on 90 day labor contracts, primarily to pick the crops.  The Mexican government became so incensed with this practice that they demanded a bi-lateral conference with the U.S. government to stop the practice.  While waiting for American immigration officials to come down to Mexico City and share a few tacos and sip Tequilla, the President of Mexico deployed the Mexican army to the Mexico-U.S. border to try and stop Mexicans from crossing into the U.S!  (How's that for irony, folks!)

So finally INS Chief Joseph Swing and U.S. Attorney General Herbert Brownell fly down to Mexico City and Mexico's President gets them drunk on Dos Equis...drunk enough for both U.S. officials to agree to implement Operation Wetback!

So the Attorney General flies back to Washington and puts the plan in operation.  He commandeers hundreds of buses, vehicles designed for desert travel, and airplanes and starts rounding up nearly 2 million illegal Mexicans. 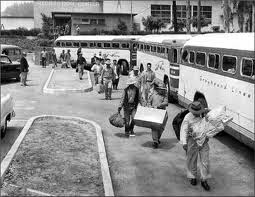 They rounded them up in Chicago and New York and Detroit and San Antonio and Dallas and California's Central Valley, and especially southern California.   As soon as a caravan of buses arrived at the border Mexican immigration officials were waiting on the other side of the border to bus them down to Central Mexico.

Amazingly, the U.S. was able to deport nearly 2 million illegals in less than a year!

Would you like to see that same kind of U.S.-Mexico cooperation again?  Would you like to see Mexico guarding their border as enthusiastically as we try to do?  Well there's a simple solution. Annual trade between the U.S. and Mexico exceeds $500 billion dollars per year.  All the President has to do is tell Mexico that trade is gonna plunge if they keep exporting their human vermin!
If that doesn't convince them, well, Mexico just happens to be one of the largest recipient of U.S. government foreign aid; to the tune of $800,000,000 dollars!  Cut off their allowance and watch how fast Mexico stops exporting their problems!

Great idea.The original plan "Operation Wetback" would not work with the political correctness of the day:Operation Unaccompanied Undocumented Minors and The Rest, is just too long to say and promote.

Craig, we'd have to call it a humanitarian crisis.

This is such a disappointing blog. I appreciate the effort to shed light on a story that can have two sides but you don't shed light on the disturbing aspects of the Wetback Operation. To say that this today would be a great idea? This is ridiculous. Not only were US citizens deported but fear mongering was used as a tactic to remove the families. Racism is clearly in this blog. You use the Governments of two countries as an excuse for the deportment of families seeking a better life for their children. You fail to realize that the individual comes to America to seek for a better home. When single men come to this country they come to support their children back home because all they can afford are black beans and tortillas. You of course wouldn't be able to understand because of your privilege and entitlement. To end this side of the conversation, the program failed. Many Mexicans and their families came back to the US afterwards.