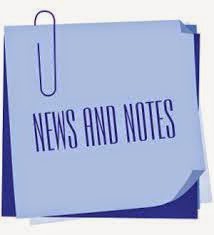 I come across news stuff all the time that probably doesn't warrant a full blog essay, but they are interesting none the less.  So sometimes I just put them altogether in a blog and smack "news n notes" on it.

Did anyone catch Secretary of State John Kerry on Fox Sunday?  We got to see one of those rare moments when a politician has his pants off.  It seems Kerry was taking a phone call from an underling during a commercial break on Fox News Sunday with Chris Wallace.  Kerry was still miked and the cameras were still rolling while a commercial was being played.  When programming resumed Chris Wallace updated the audience on Kerry's off camera phone call, then they rolled the tape.  Kerry was bad mouthing Israel on that phone call pretty good.  When the tape was shown Kerry kind of lowered his head and tried to apply a band aid to the situation.  He regurgitated the old political lines; "Israel is our friend", "we're committed to Israel", etc. but that one deadly off camera gaffe showed just what the Obama administration thinks of Israel.  Not much...they simply can't and continue kissing Muslim ass.  Both a sad and funny moment.

Examiner. com interviewed 27 year Border Patrol veteran supervisor Zach Taylor last week.  Taylor said what we already knew but what Obama and his minions won't ever reveal.  Less than ten percent of illegal invaders are caught crossing the border.  He says this recent invasion of illegal youth is simply a ruse that draws attention to the kind of adult garbage that is coming across our border 24/7.  Taylor said that Homeland Security has known for years that Russia cut a deal with Mexico that allows the Russian Mafia to operate openly within that country.  They are partnering with the Mexican drug cartels to execute both human and drug smuggling operations within our country.  The Russian Mafia are also using the Mexican border to bring in their operatives who were spectacularly successful in committing those three $500 million Medicaid fraud; taxpayer losses that have never been recovered after they were discovered.   Agent Taylor says what is being covered up by the federal government shows that the feds are traitors to their own country.

Is your local paper owned by the ultra liberal Gannett Corporation?  Their Illegal Amnesty/Open Border editorial position has been know for a decade.  No organization works harder for illegals than Gannett.  So it should not have come as any surprise that our local Arizona Republic has been nothing but a illegal amnesty rag for a month now.  Fully half of the paper is filled with sob stories about the plight of illegals.  When any state or county official speaks out against the illegal invasion they are attacked and demonized unmercifully by the Gannett owned Republic.  And, sadly, the Republic continues to censor ethnic origin when reporting crime news.  If the perp is either Black or White Gannett will identify the perp.  If the perp is Hispanic they won't provide either a name or a description of the criminal, even if doing so hinders public assistance in catching the criminal.
Sad.  Damned Sad.

I read an interesting article on The Daily Caller about the Tea Party.  The writer proposes that the Tea Party is only what conservatism used to always be about; limited government and personal freedom.  Alas, the Tea Party's greatest enemies these days seem not to be the liberal mainstream media who wrongly portray the Tea Party as racist goons every chance they get.  Instead the Tea Party's greatest threat are those power lusting Republicans who will do and say anything to cater to what's popular in order to keep their seat for 30 or 40 years.  Thad Cochran's recent plea for Democrats to turn out and vote for him was the latest bout of political whoring amidst the total surrender of conservative principles.  Cochran would do anything to keep his seat and pal around with his K Street lobbyist friends.  Maybe someday America will get tired of this massive political corruption and embrace the Tea Party.  If we don't, we're doomed.
Posted by A Modest Scribler at 2:00 AM

There is just no shortage of sad news anywhere I look now. I guess they need to be presented in snippets in order to fit it in with all the other tragedy.

The stupidity of the republican party just never ceases to outrage me, If they would get behind the Tea Party they just might find themselves owning all seats. We all want a change and those on the hill seem to be the only ones blind to the demands of the Americans who would vote for them if only...
Someone surely needs to wake up those millions of people populating this country. Our so highly esteemed first dog is making his money grubbing turn through kali right now and the disgustingly ignorant are out in droves loving him. I find it hard to have any hope for the USA.

Ken, I know...it's sad. Damned sad. For every issue I write about there are nine others that don't get attention...and certainly not from the main stream media.

The Obama administration is the first one since Israel's founding to be openly hostile to that nation (anyone remember Obama leaving Netenyahu sitting in an office for two hours, alone, after Obama walked out to have dinner? Netenyahu got the message, I assure you.). Obama's "Bowing Tour", where he kissed the rings of every two-bit dictator and strong man in the Middle East, yielded no result. Today, Netenyahu is acting like the leader he is (and Obama isn't). The US has practically no influence on the Middle East, due to the incompetence of our Fearless Leader... But at least he supports homosexual marriage, right? As for the Republicans, if the power structure continues to back RINO's at the expense of true conservatives, I will do what many are going to do: Stay home. Send up the likes of a Jeb Bush or Chris Christie as the nominee in 2016 and watch what happens in january, 2017: Hillary will be the next unqualified occupier of the WH and as much as the R's will complain about those of us that stayed home, it will be the fault of an organization more intent on holding onto power than doing what is right for the country. Participation in the political system is an increasingly futile pursuit.

Randy, I remember all of Obama's slights toward Israel as well. Just this week he promised $50 million to Gaza, then turned around and shut down flights to Tel Aviv. This dissing continues.

God, your view on voting discourages the hell out of me. While I'll fight like hell to support my nominee, there's no way in hell I'll stay home and give to Killary. No way, the worst RINO is better than Killary.