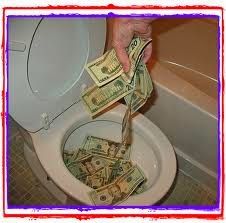 Last week the Associated Press published their annual report on government waste fraud and abuse. I found it quite illuminating.   After reading what our taxpayer money is being wasted on, I was amazed by how easy it would be to stop the waste and fraud if someone really cared enough.

Not surprising, Medicare and Medicaid proved to be the most wasteful.  We had 500% mark ups on mobility scooters, we had high tech penis pumps and we had adult diapers being marketed by TV sellers for three times the price.  We had the Russian mafia scoring three $500 million plus Medicare scams where doctors were paid to falsify medical tests and procedures that were never performed.  We had $100,000 per year Americans drawing free Medicaid benefits.   The Government Accounting Office found that, after less than one year, Obamacare overpayments are already exceeding the fraud found in both Medicare and Medicaid.

How about earned income tax credits?  Billions went to federal prisoners who hadn't worked for years, unless you count their efforts in making license plates.  How about Child Tax Credits?  Each year for the last five years we've issued Child Tax Credits to illegal aliens to the tune of $12 billion per year.  American families are earning both earned income tax credits and child tax credits in the tens of billions simply by not reporting their actual income.

How about those unemployment checks that Democrats are so willing to fall on their sword for?  $6.2 billion, or 9 percent of all claims, went to folks who were actually working but lusted after that government cream to supplement the lifestyle that they've become accustomed to.

When auditors totaled up all that fraud it came to over $100 billion dollars.  The Government Accounting Office says that figure is, without doubt far more than that, since the fraud and abuse numbers are only those where someone is actually caught cheating.

Well, I pondered on all this.  And I recall another GAO/IRS report that caught my eye a few months ago.  The joint report says Uncle Sam is coming up $300 billion dollars short on uncollected tax revenue...those who simply don't file their taxes, or underreport their income.

Well, says me, if we could somehow find someone in government that really cares about government waste, we could shave over $100 billion dollars off Obama's massive annual deficit.  And if we would  implement tax reform that captures all that $300 billion in unreported income, we wouldn't have a deficit at all...even with Obama's massive spending.

Instead we'll flush another $400 billion dollars down the toilet this year.  That $400 billion would be enough to repair all our roads and bridges, fund more doctors for VA, pay the salaries of another ten thousand or so border patrol agents on our southern border...and still leave enough to pay for Obama's vacation expenses.

It seems our elected officials think that it isn't "their job" to stop this waste and abuse. Of course, I can't really see anything that they think is "their job" or that they are REALLY trying to fix...I just hear a lot of jaw jacking.

Yes, a Billion here and a Billion there, pretty soon we are talking about real money! I still like the Chinese Solution to corruption.
Permanent and effective.

Wally, today's Republicans spend like what Democrats did 20 years ago...and Democrats spend like no one ever did before. And yep, no one really cares.

Jerry, would the Chinese solution be the same as your solution to trashing our environment? Then I say yes!

I thought you'd discontinued your blog - glad you haven't. It occurs to me that if government is so big they can't keep track of the $ they spend (and it is and they can't), it's time to prune the tree... Yet remember almost half of Americans pay no income tax,that over 48% of all citizens receive unearned transfer payments in the form of government checks of some sort... To think those that pay nothing and receive something would vote to change it ignores human nature. It will get much worse and it may never get better... Remember this the next time some quaffed pol tries to lecture you about "not paying your fair share"....