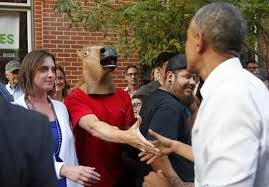 President Obama took time out during his visit to Denver on Tuesday to attend a "human-horse" marriage rights rally in downtown Denver.  Obama shook hooves and hands with hundreds who were protesting Colorado's law that makes it illegal for a human to marry a horse.

One gracious lady offered to allow Obama to ride her "stud" husband down to the border but Obama graciously declined.

The President could not stay long as he was due at a brunch honoring the Society of Lesbian and German Shepherd legal defense fund.

As he turned to leave Barack yelled himself 'hoarse" with "saddle up ladies" as he jumped in his limo and departed the "neigh" borhood.
Posted by A Modest Scribler at 12:19 PM