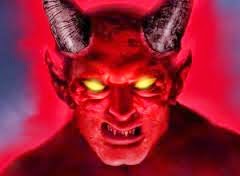 Honest to God, I haven't believed in the existence of Satan for more than 30 years...since I came to the conclusion that Satan is no more than something organized religions held over our heads to get us to fall in line.

While I do believe in God I have for years believed that hell was no more than a state of existence in the afterlife where one has all the hurts one has inflicted in his life, come back to him in spades.  Where some form of true karma exists and one must pay the price for inflicting hurt and pain.

I am now beginning to change my mind about that Satan guy...I'm starting to believe that he does indeed exist.  I am beginning to come to the realization that simple human weakness cannot justify what is happening today.

I was thinking this morning that a Satan or some animate and devious force exists that is capable of creating mass chaos.  Why?  Because people are so incredibly stupid these days!  Let's take my favorite target; liberals.  How in the world would clear thinking people believe that tens of millions of illegal invaders would be a good thing?  Have they not seen the national debt?  Do they not see our already bleeding and bankrupt social service programs?  Do they really want to battle again such diseases as polio and whooping cough and leprosy?  Why would clear thinking Americans sacrifice their own children's education by burdening the school system with illegal Mexican kids?..where funds that would normally go toward improving education, go instead to English as a second language classes, where classwork comes to a screeching halt because half of the kids can't speak English?    Why would liberals embrace, or at least tolerate the massive Black urban crime in every major city in America?  And, again, why would you want to double down with tens of thousands of Latino gangs that rule huge swaths of urban America today?

Folks, this wasn't what Democrats were like thirty years ago!  While I never agreed with liberal Democrats, at least they knew how to think!  They knew what was right and wrong...at least the basics!

So is there a Satan?  Is there some supernatural force eating the brain cells of more than half of Americans?  I'm serious!  When I sit down and think about it I can find no rational explanation!

Yes, we can play with theories all we like.  We can blame part of our decline on liberal indoctrination in our grade schools and colleges.  We can cite the deterioration of the nuclear family.  We can put some of the blame on our ever increasing trend toward hedonism and the worship of material things.

But the problem with those theories is that they don't hold up!  Every hour of every day we see proof that liberalism is a massive fail!  And yet liberals cling to their beliefs as if it were the greatest religion ever espoused by man!  Do you ever go on political message boards and read what these liberals are saying?  They really believe that Obama is the greatest thing since slice bread!  Just this morning I read an article about what Millennials believe.  They are a very unhappy bunch!  A staggering 43 percent of Millennials are either not working in their field of study and are working part time menial jobs and living at home with their parents!  And yet nearly half of those Millennials believe capitalism is inferior to Obama's socialism!  Now tell me Satan's not involved here, folks!
No one is regularly that stupid!

And please tell me, in the absence of Satan, what drug is putting a big swath of America in this lackadaisical stupor that allows a massively corrupt federal government to exist?   How can America tolerate a nation that forces them to live in crime ridden communities, who standby while their local school system turns out their illiterate kids, who willingly go out and work two jobs because the government is so inept at managing the economy?  Where big corporations export jobs overseas and reap huge societal benefits while gouging the consumer.

This Satan thing is somewhat new to me.  I'd love to kick it around with about 60 of you.  I wish we could all sit around a big table and hug a big mug of coffee and reason all of this out.  Frankly, my head is dizzy with how fast our nation is unwinding.  It scares the hell of me...a hell where I never dreamed might have Satan as resident manager!
Posted by A Modest Scribler at 2:00 AM

No one thinks of cause and effect; what happens if we do nothing and the consequences of a particular action. No one reads anymore so we have no lessons from the past. We live in a world of sound bites and incomplete sentences.
It appeared extremely reasonable to topple that bad guy Saddam, not realizing that that he was a glue in a culture that only respects power.
We deported the illegal gang members back to their South American countries not realizing that they had learned enough on the streets of L.A. to terrorize a whole nation. We offered legal council to undocumented children, sounding so reasonable at the time, not considering the backlog and wave of desperate humanity that this might cause. We offer "free" lunches, free services, housing subsidies and public pensions, never considering how these will be paid for. Sounds good on paper, sounds even better in a seven second sound bite but the results of these policies are never examined. No one thinks of what will happen when we no longer read newspapers or when our daily news demands entertainment to keep our interests.
Is there a Satan? Is this all "some kind of a test"? I wonder?
What would Jesus do?

Jerry, I agree that few think things through these days. But you still didn't answer my question: is this some Satan turning so many into unthinking zombies? (yes, I know you don't have the answer).

As to the "leave Sadaam alone" theory, had Sadaam not invaded Kuwait, and had he not been so willing to finance terrorist activity, there's not doubt he'd still be in charge today. And had he kept his cruelty domestic we would probably be better off, not having to worry about Islamic chaos..at least in Iraq.

As to "what would Jesus do", I hate that phrase. It's been commandeered by liberals to justify a socialist society with unlimited free bennies and the acceptance of tens of millions of illegals. I'll always fall back on the Big J's "render to Caesar what is Caesar's."

Satan's greatest trick of all is convincing people that he does not exist. Satan has almost gotten away with it, your perception changes when you distinquish between good and evil, right and wrong. Moral relavancy is a tool of Satan, I am glad that you see it exposed as the fraud that it is!

I'm going to think hard on that, anon. For the first time in years I'm beginning to think your point may indeed be valid!

"... what drug is putting a big swath of America in this lackadaisical stupor that allows a massively corrupt federal government to exist?" Combo of apathy and dependency: An increasing number of people simply don't care about government/politics/politicians - it doesn't impact their lives on a daily basis, so it doesn't matter. That is combined with the almost half of all Americans that derive their sustanance from taxpayer-funded transfer payments - they NEED the government check to survive. No man can serve two masters, and if people have cast their lot with the federal government, there is no reason to expect complaining about government ineptitiude no matter how bad it gets. We are throwing away our liberty, but at least "we'll be safe and have stuff."

I agree with what you're saying Randy, but there's something deeper than that. These "thinking" human beings may opt for a green check, but that doesn't explain how they really believe in a non workable liberal philosophy.

There's something deeper running just below the surface and I'll be damned if i know what it is. I look at how world events are unfolding and I'm baffled as to how things can go to hell in a hand basket so damn quickly.

At the risk of losing a lot of people, here goes: I am born-again Christian and have studied prophesy for years. The US and the UK were blessed by God and were told to keep God's laws or He would withdraw his blessing on our nations. The Bible describes the end of man's rule on earth and the US is not mentioned in end times prophesy. Why? The US will have been removed from the world stage as a main player. Look at what is happening today: Our national wealth is being lost and with it goes our ability to influence world events. God places national leaders like chess pieces to accomplish His objective. Obama has done (and continues to do) tremendous damage to our nation but the people do not protest. Satan is real, but knows his time is short because when Christ returns, Satan will be bound and removed from influencing world events. Until that time, Satan does everything he can to destroy God's work. What we are seeing is the spiraling down of the earth as man's "wisdom" fails to produce peace one prosperity. Only by God's return wilted suffering and pain come to an end, and even then, much of the world will die before God's purpose is fulfilled.

Don't think you lost many, Randy. It may unfold just as you described. Hope you're wrong...and hope I'm wrong as well.

You are definitely onto something; recall Alinsky dedicated his hallmark work "Rules for Radicals" to old Nick.