And Justice For None? 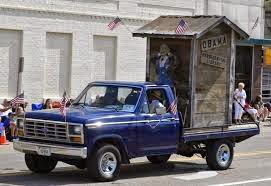 Second Note:  Frankly, I was a bit pissed that only 30 or so of you read my blog on Operation Wetback.  I did a little extra research on that one and found the facts to be fascinating!  Especially, that the whole operation was spurred by a demand for Operation Wetback by the Mexican government!  I had no idea that was the case and found that amazing!  And only 30 of you Yahoos read it!  Yeah!  Sometimes I do get a little pissed that the blogs I think are great go "under noticed" Well, that's my fault, not yours.  :)


You probably all read about it.  A small town in Nebraska held a 4th of July parade and one of the floats was an outhouse labelled Obama's Presidential Library.  Standing in front of it was a paper mache figure that folks might or might not associate with The Anointed One.  If you look at a close up it resembles Obama not a whit...in fact it was modeled after the guy who designed the float.

The float itself was made to protest Obama's massive failure to treat our injured vets with dignity and respect.  It was a mild protest, a silly prank that Americans have been playing on our political leaders for over two centuries.

Well, the NAACP got involved and said it was racist as did every Democratic political organization across the land.  "Heads have to roll!", they cried.  Someone has to pay big time for this!

So yes, we learned on Monday that Attorney General Eric Holder is dispatching a federal brownshirt to this little town in Nebraska; to ferret out the crime and the criminal, to use the heavy hand of government to persecute and prosecute to the full extent of the law.  You see, they can't use the heavy hand of the IRS because of the national spotlight being shown on their recent doings...so old Eric is front and center to punish the miscreants.

Now let's examine this thing a bit more.  Attorney General Holder has still not punished those Black Panther thugs who wielded clubs to drive away white voters at a polling station.  Nor has Holder even begun to investigate Benghazi, or the AP wiretapping, or NSA spying, or the IRS harassment, or even his own Fast and Furious fiasco.  But he's got time to harass some modest corn huskers down in a little town in Nebraska.

And hey, did you hear that it has now been 444 days since Meloweese Richardson down in Cincinnati, Ohio was found to have voted for Obama six times..and Holder has yet to even begin an investigation into voter fraud?  The Associated Press reported this week that Al Sharpton was at a Black rally down there last week and embraced dear Meloweese and said "good on ya!"  And awarded her another free Obamaphone for her efforts! 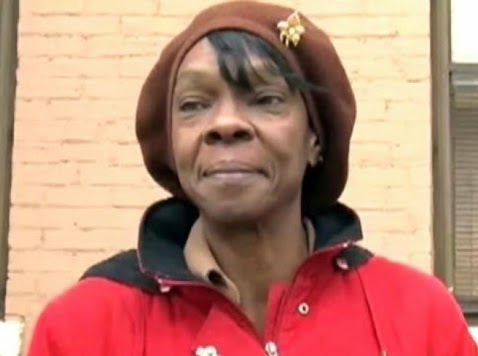 No wonder Holder is suing the states who are demanding ID to vote!  Oh, but Eric Holder wasn't done for the week.  Last Sunday Holder appeared on several Sunday morning talk shows and reiterated his January 2009 charge that America is a nation of cowards!  His beef this time?  All these Americans who are protesting the brand spanking new border invasion....anyone who opposes it is a coward, according to Holder.

So watch out Nebraska!  Eric Holder is on the war path!  You dare not make fun of the anointed one, or gripe about Black thuggery, or complain about IRS persecution, or ask about Benghazi or question illegal wiretapping....and you certainly don't put an outhouse in a 4th of July parade and call it Obama's Presidential Library!
Posted by A Modest Scribler at 2:00 AM

I never miss one of your blogs, sometimes they leave me speechless and other times wondering, always making me think. Sometimes I am too busy to respond, interested but too tied up in life and projects. Yes, sad when satire becomes criminal, but any opportunity to escape the real issues.

I have been spreading the word about your blog to more people and look forward to reading it before work daily, unless running late then after work.One little float causes such uproar, it did not show a lynching or tar and feathers, just an outhouse/library.At first I wanted to make a contribution to the obummer library, now I think a nice steaming contribution on holders front porch sounds much better. Corn and steak for dinner.

Good morning, Jerry. Oh my, Craig...that "deposit" on Holder's front porch!...not something I want to think about!

Read you every morning. Hey. Don;t leave me out. I'd like to make a stinking deposit on his porch too. Thanks.

Although I am a relatively new follower, I read everything you write. I may not read every day but I do have "catch up" days where I read sometimes a week's worth at a time. And I, too, have been trying to spread the good word about your blogs. :)
I learn quite a bit by reading your posts. Keep up the great work!
- Mar

Well, thank you Mar...and welcome! And thanks for spreading the word. Every new follower warms the cockles of my heart! :)