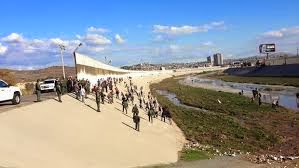 On Tuesday of this week approximately 150 Mexican Nationals breeched the U.S. border near San Diego in what Immigration officials fear was a "feeler" or "prong" attack in preparation for a much larger invasion force being planned in the near future.  When Border Patrol agents tried to stop the mob the agents were pelted with rocks and water bottles.   Agents tried using pepper spray on the mob but were unsuccessful.  Eventually, border patrol troops arrived in sufficient force to stop the invaders and drive them back into Mexico.

This latest incident comes on the heels of reported stepped up invasion activity across the entire 2,000 mile border with Mexico.  Border Patrol agents are frustrated over the President and Congress' recent attempts to "tie their hands behind their back" as they attempt to enforce our immigration laws.

Chris Cabrera, a Border Patrol Union Chief for 2,000 agents in South Texas, said the recent letter sent to the BP from a panel of Senate Democrats demanding that a "kinder and gentler" Border Patrol seek ways to reduce violence against undocumented immigrants has hurt morale and caused agents to be tentative in pursuing violators.  The situation has become problematic as illegal invasion activity has increased as Mexican nationals hope to cross the border and be present when President Obama at lasts signs an amnesty bill.  Sustained by this hope, and encouraged by U.S. sponsored informational bulletins on how illegals may secure American Food Stamp aid has led to an explosive increase in border crossings in recent months.

Agent Cabrera also laments Congress' failure to fund the legislation passed two years ago which would have hired the additional 5,000 Border Patrol agents authorized in the previous legislation.  "Same way with the fence", said Cabrera, "they were supposed to build 350 miles of fence in the Rio Grande Valley…they built 40 and the funds dried up".

Cabrera laughs in response to the Obama administration's claim that fewer illegals are crossing the border.  "With the apprehension numbers, obviously, those are only the numbers we're catching, and there's a bigger number of those who are getting away."

Immigration and Law Enforcement officials in Arizona are seeing similar problems.  As SB1070, Arizona's tough new immigration law, was gutted by the liberal courts, Arizona is now seeing a rise in illegal crime as illegals now feel free to move around at will and resurrect the business of drug and human smuggling.  Robbery, rape, and home invasions are again on the rise and the dozen or so daily "illegal hit and run" rate has returned to pre-SB1070 levels.

Immigration officials are deathly afraid that the Democratic-controlled Senate may be withholding agent funding and fence building money in order to create as much border tension as possible.  They believe this is a political effort to drive forward their proposed amnesty legislation.  The Senate takes the position that these illegal crossers are good upstanding Mexicans whose only crime is wanting to pursue a better life in America.

I guess the only thing that will change the Senate's mind on that position would be to have them stand watch on the border, just to see how it feels to be pelted with rocks and full water bottles…or worse.

What makes this a difficult National Issue is that for those of us farther away from the border, we are simply not aware of the problem! In my little town (Oregon) there are very few illegals and the immigrants from South of the border have brought good food with them. We finally have decent "Mexican" food in this town! That is the plus side. We don't see the crime statistics. I like your sheriff who makes convicted felons (of all races) live in tents, wear pink underwear and eat plain sandwiches!I don't like "the idea" of our very own "Berlin Wall" and suggest a method to punish those who hire illegals, starting with a $25,000 fine for the first offence, even for mowing your lawn. And No, even "this liberal" would not give food stamps to those that were not citizens.

But the Berlin Wall was to keep people in, Jerry…don't see a border fence as a parallel.

Other than my taters, cornbread and beans, I think I would miss good Mexican food more than anything else. But I want it cooked and served by those who came here legally.

Our govt and especially this administration piss me off beyond words. I get 3 weeks vacation Jan 1, might have to pack up and go camping near the border with hollow points and binoculars. (zip ties to hold the illegals for transport to obamashouse.

But our Glorious Leaders say we want these immigrants since they bring in so much "culture." Yes they do, if by culture you mean 3rd world diseases, hate of America, refusal to obey laws, refusal to learn the native language and the general destruction they leave in their path. This goes for all illegal immigrants not just Mexicans, but we sure do want the "culture" they bring don't we.

Sadly true, Trevor. We are now seeing the emergence of diseases that we hadn't seen since the 1950's…thanks to the 30 million or so invaders who bring their diseases with them.