A University Grant To Concoct A Social Security Scam 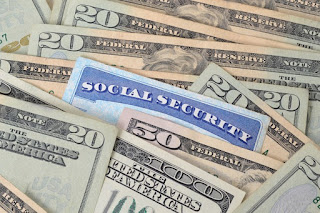 Hmmm. Just had an interesting read about how the Feds are trying "save" Social Security. As you might know, 2019 is the first year in which the total Social Security taxes collections is not enough to fund the payouts to current retirees. And you might also remember that it was in 1965 when Lyndon Johnson and his Democratic majority in Congress chose to integrate the hundreds of billions in banked Social Security savings, and sweep the money into the General Fund....to pay for both Johnson's Vietnam War and his grand government gravy bowl called The Great Society.

Since that time every Social Security tax surplus has been swept into one pile of money, to pay for our ever growing government gravy bowl.

Well, since we can no longer steal what's no longer available the government is now being forced to come up with some hard and fast fixes.

Accordingly, the U.S. government recently handed out a grant to Boston College's "Center for Retirement Research", hoping a collection of Eastern eggheads could come up with a few ideas to keep the fund solvent.

Well, they did. And here's a few of their ideas:

1) Remember when you got ready to sign up for Social Security and you walked into your nearest SS office? Well, they consulted your career earnings from the bowels of their computers, checked to see how much Social Security taxes you paid in, then proclaimed what amount of pension you would receive.

Proposed Boston College fix: If in the future you want to apply for Social Security you would be asked to appear before a Social Security panel to explain why you need that Social Security pension. They will not care that it is your money, paid in, as demanded by the government. They'll want to know if your mortgage is paid off, how much money you have in an IRA, how much you have in your savings account.....and if it is substantial they will ask why you are trying to suckle at the tit of Social Security. In other words they suggest you be means-tested to get any money back that you paid in.

2) Given the growing number of American citizens who do not work, and live off the generosity of city, state and federal welfare checks, and given the number of stay at home unmarried baby breeders, the eggheads at Boston College say something will have to be done to support these people in their old age. They suggest that a healthy portion of YOUR pension be withdrawn, then given to those who paid no Social Security due to their impoverished condition. As precedent they cite the current Social Security practice of giving green card holders without income a poverty driven payout of $1,000 a month..an amount that exceeds payouts to our own elderly citizens. Brilliant, huh?

In the government grant awarded Boston College the Social Security Administration essentially said "these baby boomers are becoming a real drag on our ability to pay them what we promised we would". Again, brilliant!

3) The most intriguing egghead proposal was to try and tempt those who become eligible for Social Security into taking a lump sum up front, then surrendering their rights to ever again come to SS for more money. The Social Security administration asks the eggheads if SS pensioners might be bought off for as little as $50,000. Again, brilliant.

Be afraid, boys and girls, especially you 50 something whippersnappers who might have to prove you really need the dough you paid in.

Seems to me it might be in our own best interest to discreetly start 'eliminating' as many of these leeches as we can so enough of 'our' money remains for us. Civil war looks more and more inevitable.

Things seem to be looking more and more bleak, Jeff. I see no way out unless some credible third party emerges from this mess. But we'll have to inflate our way out and many are going to suffer. Government never does.

I saved and invested since I was a 2nd Lt. beginning in 1982. I'm now 59 and as a result of not living like many of my friends, I do not worry over money. I still work and have no plan to retire. SS is going broke, and as unpopular as it is, I have always believed means testing was going to be government's answer. That said, it won't be sufficient simply because so many in my generation have not saved at all. I have so may friends that still live paycheck to paycheck it is hard to believe. They are counting on two things: Inheritance, and SS. The only way forward will be more taxes and reduced benefits for everyone. Government greed is finally going to be felt by the masses.

I totally agree, Randy, that the "paycheck to paycheck" generation represents the straw that broke the camel's back. The boomers had their greatest generation parents' inheritance to get by, an advantage the later generations do not have. Yes, we will inflate and means test until the problem becomes manageable.