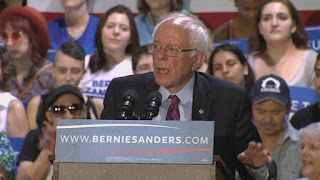 Well it's official.  (Whew!)  On Monday Bernie Sanders officially announced his candidacy for President for 2020.  Feeling the heat, a dozen of his socialist pals having already declared their candidacy, Bernie said "hey, I can ladle out government gravy with the best of em....so why not go with the "original flavor".

And Bernie, just to show he's steadfast, has included his support for doubling the amount of welfare checks, expanding Medicare for all, the government picking up the tab for $2 trillion in student loans, and making a university education free for all.

Bernie said he believes he has a leg up on his competition because he owns the digital addresses of some ten millions of folks who never asks how much those giveaways are going to cost.  I just don't know.  Senator Kamala Harris has been generating her own lists of "cost plus zombies" and since California has moved its 2020 primary from June to March she believes she can front load her campaign with a victory in her home state.  She may be right.  Bernie will no longer be able to collect victories in those little piss-pot Midwestern states to build momentum.  He's going to have to go to California often if he hopes to win that state.

Perhaps Bernie can promise California that he'll prevent wildfires and mud slides, and build a huge, beautiful revolving door at the Mexican border........the better for the folks from Mexico, Honduras and Guatemala to come through without being hassled.  Perhaps Bernie will offer the Feds taking over California's half trillion dollar shortfall in their pension system.   And if things get really nasty he might declare that, between he and Kamala, he's the only one who didn't sleep with Mayor Willie Brown to get ahead.

Bernie has yet to explain how he'll pay for free college tuition for 40 million young people.  Or where the $2 trillion in student loan forgiveness will come from.  Or the trillions more for a doubling of the welfare checks, or to foot the bill for 350 million people entering the Medicare rolls...without ever paying a dime into the system.

But then being a Democratic Socialist means never having to explain anything.  It's enough that the goodies are promised.  Maybe Bernie can recruit his cabinet from Venezuela.    I hear they're not too busy these days.

Posted by A Modest Scribler at 6:02 AM

Isn't it amazing how gullible people can be? I guess this next election will show how many people in this Country suffer from the dreaded disease Nobrainatall, because anyone with at least a half a brain can see right through these Charlatans. With most of the brain dead people concentrated in States such as California and New York, it shouldn't be that hard for whomever runs on the Republican ticket to win again. Time and again, Socialism proves it does not work. Maybe we can put it to bed for good in 2020.

All that remains is for Hillary to run again. Said this before, never underestimate the willingness of the 55% that actually vote to support the pol that promises free stuff. I want the hardest leftwing candidate possible so we can finally see if America lives or dies. I have no faith the smart people will prevail.

Frank and Randy, we have two prevailing thoughts here.....Frank that the Left will make this a Republican slam dunk, Randy worried a little that the "55 percent" are willing to vote themselves more gravy. I'm gonna hope, like Randy, that we get the radical socialist to run against. I worry about those 55 percenters too.