Democrats: We Can Only Hope They Stay This Crazy 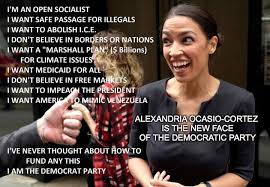 The far left crazies who now occupy some 44 House seats, and a dozen in the Senate are a new thing only in the sense that their numbers have increased of late.  There have always been seats in Congress held by people who, in the real world, could not hold down a job as garbage collector.  Once, wondering why that was, I wrote my local congressman and asked him about how folks as dumb as Sheila Jackson Lee, or as corrupt as Charlie Rangel and Maxine Waters could achieve such high office.  His response was quite frank.  Shunting aside niceties, he said our Congressional representatives are only as good as their constituents.  He pointed out that leadership, for ill or good does not emerge from a vacuum.  If Blacks are content to elect, then re-elect again and again, someone like Charley Rangel, who nearly went to prison for tax fraud, there seems little hope for a moral resurgence of that community.  Same principle applies for Maxine Waters, who has never done anything for her ghetto dwelling constituents, lives in a mansion outside her own district, yet continues to win re-election.

Yet despite the historical precedent of our government always having a few bonafide idiots and scoundrels, I am worried that we are getting more and more of them in important government offices.  And even when I shunt my politics aside it seems to me that the vast majority of the loonies come from the Democratic party.  From the top echelons of the party we have folks like Bernie Sanders and Elizabeth Warren who espouse openly Socialist policies.  New advocates are arriving on the scene every day...from Senator Corey Booker who failed miserably as a Urban New Jersey mayor, to California's Kamala Harris whose only claim to fame is that she slept with men forty years older to win a position of power.  We have Texas's Beto O'Rourke whose resume includes a hit and run conviction and aspirations to legalize as man drugs as possible to reduce drug related convictions.

The newest crop of crazies were elected on the heels of the MeToo Movement, a coalition of women who believe that abortion is a viable form of birth control and conviction by accusation ought to be enough to destroy a man's reputation.  Among those are radical Muslims from the Midwest, who openly scream "Fuck Trump" to New York's Alexandria Ocasio-Cortez, who makes Nancy Pelosi look like a right wing nut job.  Even as I am writing this Cortez is leading a door to door campaign to nix Amazon's placing one of their headquarters in New York City.   Despite Amazon's contractual pledge to hire 25,000 employees, all of them to be paid at least $150,000 a year, Cortez opposes the project...alleging that New York didn't hit Amazon hard enough for sweeter goodies.   In light of the proposed Amazon boycott, Amazon is now saying they may withdraw from New York.

But even if we set aside Cortez's arrogant flamboyance, and just look at the policies she advocates, she is a scary thing indeed.  If Congresswoman Ocasio-Cortez gets her way she could more than double the national debt in less than a decade.  She's dangled more free government goodies in the face of her constituents she makes a carnival barker look staid.

I may be wrong but I have to believe the latest sweeping into office of so many crazies had to have been spawned by a bunch of angry women suffering bouts of temporary insanity.  I have to think that, women things calm down a bit the American people will see these far left nut jobs as all hat and no cattle.  And if the current crop of left wing Presidential candidates stay consistent with their socialist agendas I just can't see the American people buying their long laundry list of government giveaways.  The average voter knows enough math to know none of it adds up.

So, to my conservative friends, let's hope the far left get even crazier.  That may be Trump's only hope to win re-election and for Republicans to reclaim control of the house.  And Trump, given four more years, can surely select a couple more Supreme Court judges that will finally nullify John Robert's vote, and purge the district courts of liberal judges who abhor reading the Constitution.
Posted by A Modest Scribler at 3:00 AM

Can't wait for next election season when the Democrats will chew one another up to try to be President. The Circus is back in town, baby. It's going to be a fun ride.The Loony Left is holding true to their nickname. I see today as a close relation to the "Hippie Movement" of the 60's and 70's. Too many young people with too much time on their hands. They eventually wake up to the reality that Politicians will promise everything but deliver nothing. And that's a fact, Jack.

And it will be even more interesting if Howard Schultz runs as an Independent, as he has promised too. Fragment the hell out the liberal lemmings and they'll be pulling their hair out once again.

That would be great! Of course, the Dems will accuse the Republicans of paying Schultz to run instead of the real reason he'd run. He(along with a lot of us) is tired of all the crap coming out of Congress. They are a waste of time and money. Another positive is you can tell a Dem from and Republican without having to talk to them. Bald+Democrat. Hair+Republican. Plus, the hair restorer industry would explode!!!

I am not as optomistic as you. Reagan told us were are but one generation away from losing (what's left of) our liberty. This current crop of progressives are deadly serious about turning this nation socialist. You can laugh at them, but understand the day they are the majority in Congress with a Democrat in the WH, they will move with lightening speed to install their regime. Once that happens, there is no going back. As more young people with big college debt are offered the choice of paying that debt themselves, verses voting for a candidate that promises to eliminate that debt, it isn't rocket science to see that appeal. Selling the necessities of life as a "right" has become the standard refrain from the left. Our society increasingly seems to believe it is feasible to get "free stuff" and left someone else foot the bill. I hope you are correct, that there are enough voters left that recognize the lunacy spewing from the Democrats for what it is. I'm just not sure you are correct. BTW, with all the new female members of Congress, let's see what objective difference they make. My guess is absolutely nothing.