On How Trump Won The 2016 Republican Nomination 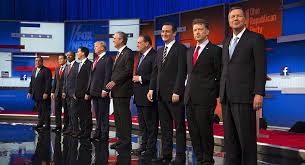 I've been giving a little thought lately as to how Donald Trump won the Republican nomination for President.  Not the general election; I believe the Presidency itself was won because so many people disliked and distrusted Hillary.  Even among Democrats, they either didn't much like her arrogance that led to her basement email server, or they didn't believe she and Bill could accrue two hundred million dollars in personal wealth without her Secretary of State shenanigans.

No, my thinking has been more along the line of how a quirky fellow like Trump could win out over a dozen polished politicians.  Trump was an inarticulate blowhard whom many in the party considered totally unqualified for the office, both academically and in temperament.  So how did The Donald wrest control of both the party, and send so many old political heads into withdrawing from the race.

Having thought about it some I think we have a larger, overreaching factor to look at.  I believe those fellows faded because they are representative of a weaker breed of human than we have seen in politics in previous years.  Rand Paul was "Ron Paul II", a version of maverick that could never connect with the great political middle.  Jeb Bush was the weaker dilution of the two previous Bushes....paled eyed, pale faced men who were never up to the intellectual challenges of a world peopled by Americans who didn't inherit money, didn't advance in their careers based on name alone.  Jeb was a sob sister who said illegal immigration was an act of love and that conservatism is only good if you don't offend anyone.

Kasich, as he has proved since, is a Republican In Name Only RINO who cares far too much about being liked than he does in holding to conservative principle.  Marco Rubio was some sort of Hispanic cross-breed between Bush and Kasich....a well spoken conservative pretender.  (No conservative would push for expanded child tax credits for stay at home breeders as Rubio did in the last tax cut plan.)

Except for Cruz, the rest of the candidates were fringe players, at best.

So one wonders what Trump's seemingly easy defeat of these otherwise accomplished politicians does to signal the arrival of a far larger, more serious problem.  Are we now breeding the weakest stock to lead the conservative crusade?  Unlike the Democrats, who would offer their own mothers for slaughter if it meant a win, we in the Republican party seem to be breeding milk toast men and women who cringe when confronted with anything hard.  Witness this latest fight for Trump's wall.  We had Republicans at least swallowing hard before supporting the President on an issue that ought to be considered a serious national threat.  Many went past the fringe state....both our Senators from Alaska and Maine crying crocodile tears over a government shutdown.

So, if we are indeed facing the future with such poor breeding stock, what are we to do?  Will we continue to shuttle out half mad, inarticulate mavericks like Trump.  Is there a dearth of Reagan-like, principled strong men for those future battles?  This worries me a great deal!  Other than Ted Cruz, and perhaps the soon to be retired, articulate ex-prosecuter Trent Gowdy, I don't see anyone in the party capable of giving us strong principled leadership.

I believe we are in serious trouble, boys and girls.  Hell, we may have to wrestle a 90 something Clint Eastwood off his horse to represent us in the next go around.

I have thought the same thing! Contrasted with the Democrats, a party unified around their dedication to drag the country into socialism, you ask yourself what does the Republican party stand for? Half of them support the same policies as Democrats. Fiscally, they vote to overspend the revenue every chance they get. Those of us that are actual conservatives see the Republicans as the lesser of two evils (which reminds me of what GHWB said about gun owners in his election when he was open to more gun laws: "Where else are they going to go?"). That seems to be the attitude of the Republican party these days: Either us or a Democrat. Trump spoke to an American voter disgusted with the choice of hard left or soft left. I dislike much of his personna, but I do appreciate his obvious love for the nation and his enthusiasm to engage what he sees as rot in our politicians. Not popular to say, but I believe our best days are far behind us. The gimmies are growing, our dedication to individuality is waning. The likes of Harris and Booker are revolting, but they are players. If not Trump, then who?

Hit the nail right on the head, Scribe. You look at the Dems and they ALL seem to be Bulldogs, NEVER straying from the Party Line. When do you ever see the term DINO(Democrat in name only)? NEVER. They don't talk bad about one another or their President. Unlike the Milqtoast Repubs, who just don't seem to want to get into a fight with anyone. The Bulldog Republicans like Trey Gowdy and Jason Chafetz, can't stand being around Sissy's so they leave. You can call Trump whatever you want, but he is a Bulldog and that's why he won. He stood out. He really was our only choice to battle the Dems. But I'm not sure he wants to do this again. Fighting 2 Party's can't be much fun. If he was a Democrat, they'd be swooning all over him. But as a Republican, he stands almost alone. 1 against 535. I'd walk away too.....