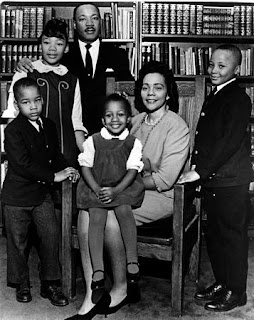 In 2011, immediately after the release of FBI files on Martin Luther King, the liberal Washington Post released an editorial, asking Americans not to judge Dr. King as a saint, but as a man with flaws.  The Post says it is totally understandable that Dr. King was drinking and smoking more, given the pressures of his ministry.  And it was perfectly okay that Dr. King had several mistresses, including the one who stayed with him the night before he was assassinated.  Those were not rumors.......His aide, former Ambassador Andrew Young confirmed the stories in interviews twenty years after King's death.

The Post's polishing up the King image is but a continuation of the national trend to forgive any number of Black trespasses.  A jury of O.J. Simpson's Black peers declared him innocent of murder, despite overwhelming evidence to the contrary.  Life long thug Rodney King was elevated to Ghandi status.  Convenience store thief Michael Brown was made a martyr, as was Trayvon Martin, teen burglar and blossoming thug.

Al Sharpton is a tax cheat, as was Congressman Charlie Rangel, and Jessie Jackson both bred a master thief who is preparing the taxes for his fellow inmates these days, and called New York "Heimie Town" for the proliferation of Jews in that city.  Barack Obama's cocaine use was passed off as teenage hi-jinks, proving again and again that, if you're Black, it's all good.

In this age of Black pampering, and the "Church of The Me Too", it seems that only Whites must pay their dues for past sins committed long before Millennials were born.  The news this morning leads off with the continued drum beating for a resignation by a  governor whose chief sin might have been a black face photo from four decades ago.  Two TV weathermen stumbled over Martin Luther Coon on air, one of them losing their job.  TV "newsman" like Don Lemon have declared White men the terrorists of our age and no less than half a dozen Black academics have called for the mass execution of White men if we are ever to achieve racial equality....all offered without repercussion.

I think racial equality is already here and the pendulum has swung way too far.  Blacks are given a lifetime pass against punishments, a permanent "get out of jail" card in the game of life.  Whites on the other hand had better watch their step.

The pygmies who now rule the national conversation will no longer tolerate an iota of mistakes.  Liberal god, Franklin Delano Roosevelt would never have been President.  He had two mistresses and Black stone jockeys on his front lawn.  Eisenhower had his British mistress to keep his bed warm and John and Bobby Kennedy were the Energizer Bunnies of philandering.  A series of Republicans were kind of boring, then came Slick Willie Clinton, America's first serial rapist President.

"No Mas!"  Admittedly Obama was such a lousy President that America elected a crotch grabber but I wouldn't count on future success if, man or woman, had committed any of the newly defined sins...sins so minor they make The Ten Commandments look like a cake walk.

The only folks I see getting elected, and remaining in office, will be Franciscan Monks who've sworn an oath of celibacy and never again opening their mouths, less some utterance offends the so easily offended.  Ideally, our next leaders will be transgendered Blacks with an attitude.

It seems that the only acceptable speech these days come from the hate-spewing of the far Left...or any Black who believes he has something brilliant to rap about.    Let's see which one of them can successfully run the gauntlet to win the White House next year.  Going to be some interesting times ahead of us as the Pygmies assume the roost, looking for saints who aren't there.
Posted by A Modest Scribler at 3:00 AM

Concur. As a conservative (think John Birch conservatism), it is ridiculous that a pictue from almost 40 years ago can ruin a political career spanning decades. I couldn't care less what someone did in college. It wasn't a crime, and this needs to stop. Still, with the "Me, Too" attitude where an accusation suffices for actual evidence, Dems will be similarly pilloried. The question is whether the MSM will demand the same amount of flesh from the left. My guess is they won't.

I guess we shall see if Dems suffer the same rain of arrows, Randy. Keep an eye on Virginia and E. Warren's never ending Native American nightmare.