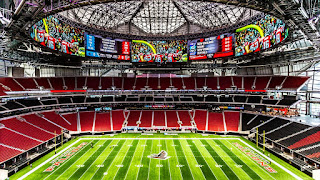 Well today's the big day, huh kids?  The Super Bowl!  Not nearly as much fun as it was when Bart stumbled for half a yard against Dallas, right?  Nor are we likely to see anything as exciting as Montana's Drive, or even Seattle's gift to Belichek and Brady from a couple of years ago.  And with the "knee-taker boycott" not met with as much good cheer as in past years.  It doesn't matter.

The Super Bowl is now much more than football.  In fact it has as little to do about football as Christ at Christmas.  The Super Bowl is the opportunity to keep the Budweiser folks in the black, for Pepsi and Coke to sing the praises of corn syrup, for Betty White to attribute Snickers Bars for her longevity, and for at least three automobile companies to pimp their ride by showing the latest models careening off multi-level parking lots, into the mean streets below.

With the Los Angeles Rams and New England Patriots as participants you have probably 80 percent of viewer noses who don't give a shit who wins....their teams relegated to the ash heap of history.  But since the Super Bowl is no longer about football even the teams don't matter.  What matters is gathering a group of friends together and, like Thanksgiving, filling your gullet with as much beer, booze and junk food that your poor gut can tolerate.  Also like Thanksgiving, Super Bowl is kind of like the Christmas office party....a chance to eat lots of those little brown wieners in a sweet sauce.  (And, no, in the age of widespread gender diversification, I ain't going any further with that).

Super Bowl day itself is rather exhausting.  If you are of the devoted sect your pre-pre-pre-game coverage begins at sun up on Sunday.  So, if you don't have a hangover from Super Bowl Saturday Night, you arise with the rooster and turn on your set, and prepare for ten hours of the most inane pre-game commentary you are likely to hear...until the next national political convention.

By game time the game itself is something of a let down.  Nervous players will fumble the occasional kickoff, one of the coaches will ratchet his arm forward and okay a 4th and four yard effort while still at their own 39 yard line, and the team that realizes first that it's just a game will be victorious.

The game itself will be played in a stadium that costs as much as the combined Gross Domestic Product of 80 third world countries.  That has become NFL tradition.  Whichever city's populace are dumb enough to shell out a cool trillion dollars for a new stadium goes immediately on the list to host a Super Bowl in the very near future.  And that host city will inevitably lose a hundred million dollars in safety and security costs.  And the Atlanta cops will be pulling double shifts as they roust America's thuggery gathered for a week of debauchery.

I saw this week that Homeland Security, the FBI, and Georgia state and local law enforcement held a press conference to announce that $124 million dollars in phony tickets and merchandise was purchased by Atlanta denizens last week.  That is definitely a no-no and the NFL integrity of selling you a $200 dollar football jersey will not be tolerated.  Nor will they allow any riff-raff with a purloined counterfeit ticket to enter.  Ya pay your $7,600 dollars for the 50 yard line, or $4,000 for the nosebleed seats, or you don't go in.

I see this year Hollywood is urging their fellow entertainers to boycott participating in the half time show.  And many a diva are complying.  There will be no Lady Gaga hanging from the stadium rafters, or Janet Jackson baring a breast, or Green Day trumpeting the redeeming value of saving the planet from floracarbons.  Doesn't matter.  Half time is usually a period of 30 minutes when some 200 million Americans take a half time dump and send ten thousand metric tons of raw sewage flowing through America's crumbling sewer systems.

And when the game is finally over, and Lombardi Trophy awarded, ten tons of confetti will come billowing from stadium rooftop, half of the players attributing their victory to God's being on their team, the other half praising their agent for scoring them a hundred million dollar guaranteed contract.

By the time the hoopla is over it is midnight.  Your big screen TV has been tuned in to the festivities for some 18 hours.  You will stumble drunkenly to bed.  And the next morning you'll try to remember which team won.

That's the Super Bowl, boys and girls.  Happy Super Bowl Day!
Posted by A Modest Scribler at 3:00 AM

Football has lost it's luster for me and the only reason I "might" watch a game or read the sports page is Fantasy Football or picking my team for Draftkings where I can win a million bucks if the players I pick have a great game. I'll go to my Girlfriends house today and we'll passively watch the game, get bored and do something that includes nudity then buy a pizza(no beer,I hate beer) and yawn a lot as I watch two teams I have no interest in beat one another up for bragging rights. Sort of like the Gladiators. It's too bad because I used to love watching games for 9 hours on Sundays, breakfast with Friends at the local Pub. Not sure Kapondick had anything to do with the change but he sure didn't help,

Maybe part of it is aging, Frank. Still, if Montana were still out there playing I would watch. And, murders not withstanding, one of my favorite seasons was when Howie and Frank and Dandy Don were up there and calling out O.J's yards as he scooted through 2,000.

We 49er Fans were spoiled by Montana and Company. The malaise could also be the 25 years since the 9ers have won a Super Bowl and nothing resembling a competitive team for years to come. Getting rid of Harbough was a fatal mistake....