Where The Fuck Is Jesus? 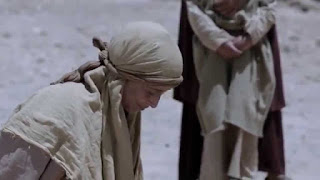 Most of us remember the biblical passage.  Jesus comes upon the crowd ready to stone Mary Magdalene for her sins.  Jesus stands there, like Clint Eastwood in a Spaghetti Western, bends to pick up a stone, then proffers it to the crowd, saying "let he who is without sin cast the first stone".

Well, let me tell you, the Big J is playing hooky these days.  And the crowd is getting crazier and crazier.  This week we have a mob of hyenas calling for the resignation of a sitting governor who, 35 years ago (35 fucking years ago!) donning black face and posing for a college yearbook.

And this governor, a Democrat for god's sake, is not alone.  To the mad lemmings that command the national conversation there is no statute of limitations for past sins.  Politicians resign their seats for something they said thirty years ago.  Hollywood stars find their contracts drying up for something they said or did when they were in high school.  A couple of years ago a kid that was bound for a choice high draft pick sunk into oblivion after it was discovered that something he said when he was 14 years old was offensive to somebody........some black, brown, Muslim, or transgendered freak from the 3rd power.

It's all crazy.  In a world where there are no saints the mob demands the pristine perfection of political correctness that does not exist, and never has.  And the hypocrisy is such that someone like Babs Streisand, who really does live in a glass house, feels no compunction to throw down her own fistful of stones.

And since no one is without sin, every stone thrower lives in fear that their own misdeeds will be revealed and they too will be asked to don the crown of thorns and climb Calvary Hill.

Things have gotten so bad these days that those with a bent for the politically correct just stand in a deaf and dumb Twilight Zone, lest they offend someone.  And, just as proven with this Virginia governor, it is not enough that you toe today's politically correct line.  It is not enough that you know all the right things to say, and the wrong things to keep mum about.  Instead you need to sort through every family album, delete everything you ever said on social media, and buy up all the school yearbooks you can get your hands on.

Well, you know Jesus must be really pissed.  He's taken a powder and let mob rule reign.  And the only real winners are those, like me, who don't much care who the hell we anger.  Why shoot for politically correct perfection when that path is fraught with only grief?

Posted by A Modest Scribler at 6:27 AM