Whew! We're All Glad That's Over! 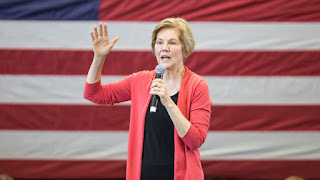 Well it seems that Elizabeth "Pochahantas" Warren made a pilgrimage to Tulsa, Oklahoma last week.  She came bearing apologies....for taking a DNA test...and for borrowing from her one tenth of one percent Indian heritage to score preferential racial quotas and a $300,000 dollar per year job at Harvard.

As usual the Cherokee nation was gracious.  Their tribal Secretary of State accepted Warren's "mea culpa" but warned others that a few drops of Native American blood does not make one a card-carrying member of the Cherokee, or any other Indian tribe.

Reporters weren't sure if they heard correctly when current Cherokee Secretary of State, Chuck Hoskin Jr., stepped down from the stage and whispered to a fellow tribal member; "white man always speak with forked tongue....politicians especially".

Following her meeting with the Cherokees, Warren's contingent moved over to a rally in downtown Tulsa.  There she stepped to the podium and denounced wealthy financiers and oil barons...then took up a collection from the Stetson and Llama Boot crowd to the tune of a million bucks.  Warren then climbed into her long black limousine, the tail pipe spewing fluorocarbons, en route to a climate change rally.

Senator Warren then plans to hurry back to Massachusetts, where she will again pore over her DNA test to make sure she doesn't have any family that came over on the Mayflower and quickly began hanging witches.  One never knows what one will find in those pesky DNA tests.

Once a Hypocrite, always a Hypocrite. Thank God we're not all brain dead. Looks like all the Democrats running for President have to do an "apology tour" first. Damn those skeletons. It's going to be a bloodbath. No more "Hillary preferential treatment". The Winner will have earned it.Going to be a fun two years.

Frank, my next blog is about that very subject. Pygmies rule.