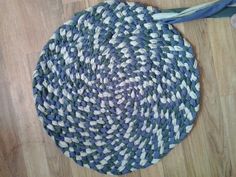 The young man rose from his bed early....better to get out and issue his swan song to America...at least  for awhile.  The weather on that day was indecisive, one minute the sun shining, the next fleeing behind a cloud.  The winter wind too acted like it had no place to go, first sweeping eastward, from over the coastal hills west to east, then whipping bare tree limbs and winter wash out on the clothesline as it sped back from which it came.

The kid walked to the bathroom, threw cold water into his face, brushed his teeth, then slipped on the temporary adornment of sweater and jeans, and boat shoes.  His summer blues, speckled with a single "Enlistment During Time Of War" ribbon at the top edge of left pocket, his sleeves bare except for two lonely wings, denoting his low standing in the Air Force, hung morosely over the curtain rail of bedroom window.  In the corner of the room stood his green duffle bag, stuffed full of summer and winter weight uniforms, and olive green field jacket, and jungle cammies, and boots, leaving little room for any personal niceties.  But then he would have little room for niceties where he was going. 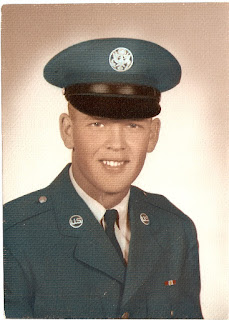 He walked into the kitchen, a sense of dread hanging over him like some medieval spell.  Conversation was a fragile thing that morning, everyone knowing he was bound for a war zone, no one much liking it, yet trying to rally for a Christmas celebration five days early....that he might have one at all this year.

The mother suggested breakfast as he poured his first cup of Folgers, the meal declined.  Soon the house, filled so with such melancholy, became just too oppressive.  So he grabbed the car keys, and headed out to Fresno, to the mall, to pick up two small gifts he had ordered earlier in the week.

When he returned the stragglers of extended family began to arrive, bearing gifts.  In the kitchen the holiday table was laden with all of his favorite foods.  So they sat, and talked with a brittle care, and quenched dry mouth with sips of tea, and tried to enjoy a Christmas meal through the constricted, stifled sobs of sorrow.

When it was time to present him with his Christmas gifts....small things...stationary and stamps...they gathered around as he opened each of his gifts.  At some point in the ceremonial giving, the young man leaped from his chair, fled to the safety of bedroom, that they might not see the tears of half boy, half man.

All too soon it was time to crawl into his uniform, batten down his duffle bag, swing it over his shoulder and toss it into the trunk of his friend's car.  He then turned and kissed and hugged, then climbed into the car and headed west...out to Travis Air Force Base, north of San Francisco,  air terminal for 550,000 boys just like him, bound for war....bound for a place that would change a life forever.

3,000 miles to the east, on the morning of that same day, in New York City, an old man awakened in his luxurious 34th floor apartment.  And as he lay in his death bed he looked out through his ivory tower wall of glass, and watched the snow swirling out there.  Though the old gent was but 66 years old, this would be his last day on earth.  He had smoked too many camels, chewed on too many cigars, swigged an ocean of whiskey, and purple ponds of wine, slept with too many whores and too many ladies, and shared the world's gutters with the downfallen.  And his life was shortened as he had to live it, and live it again as he wrote about it. 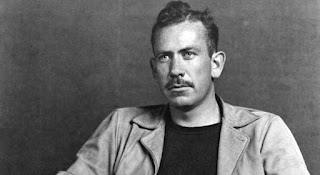 And, my, could he write!  The literary champion for every Okie, every Filipino lettuce picker, every Mexican fruit packer, every sad drunk who ever peopled the bars and alleyways of Frisco, every regular Joe who picketed for a fair wage, and for every man and woman who got knocked down and struggled to their feet...to fight again.

He wrote with an elegant simplicity that made even non-readers want to turn the page...to see what happens next.  He created great beauty from the human refuse of anyone who had ever lost something precious.  And wrote it with such integrity that his human creations leaped off the page and dwelled in the heart.

And just as the young man, 3,000 miles to the west, was gathering around him his loved ones, before setting off on the great voyage of his life, the friends and family of the old one began a death watch, he too bound this night for distant realms.

And that evening, just as the old man breathed his last, the young man sat his duffel bag down in front of him in that swirling air terminal madness, waiting to hear his name called for boarding.  And, with time to kill, he keyed open the Master Lock on his duffle bag, and plucked a paperback book riding atop his worldly possessions.  And then he opened the book, found the dog-eared mark of the page last read, then began to read of an Okie pilgrimage that traversed old Route 66, hoping to escape the dust bowl of home, and arrive at the land of milk and honey.  And with every page read the young man could see the faces of father and mother, brother and sister, uncles and aunts, and cousins, all of them toiling in cotton  field and orchard and vineyard, to win a day's relief from a growling stomach. 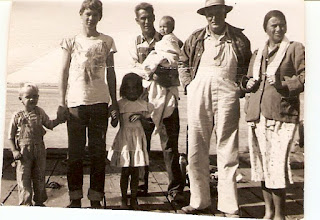 That was the power of the old man's words....words made indelible in human mind and heart, even as the old man drew his last breath in an airy 34 floors high on a dreary December day fifty years ago.

And the young man is now an old man.  And he too is not too many years away from his own demise.  But, as long as he breathes, as long as he remembers, as long as the song of the downtrodden still echoes in his heart, he must say a prayer of thanks to a man who told the stories of those whom time might forget.  Two voyagers, one young, and one old, each bound for all the unseen tomorrows.

Posted by A Modest Scribler at 2:43 PM

Another great story Dearel, as usual.

Thanks, Wally. Have a great weekend.

Have not been taking time to read these as have been traveling for work. My loss I have alott to catch up on, exceptional as always.

Thanks much, anon. Be sure and take time to smell the roses.