Blinders For Those Who Shall Not See 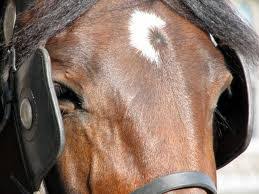 Whenever I'm reading the history of the early 20th Century's social movements I always come across literary passages....from John Dos Passos's USA Trilogy, from Sinclair Lewis, from Theodore Dreiser's detestation of the monied class, or even a few bon mots from monopoly-busting Theodore Roosevelt.  I have always loved the study of history....no only because it helps me to understand the times I live in, but it also serves as an advisory that we shouldn't repeat our same tired mistakes.

Alas, man is foolish and man does continue repeating the bad habits of his forebears.  To cite an example that applies today, I remember reading about the American 30's when folks really believed that Communism was the answers for fixing our faulty republic.  I remember reading one literary passage where two gentle and lovely old rich women were conversing over tea and crumpets out on their Victorian front porch.  One wealthy lady said to the other "Gladys, how much more do you suppose we'll have when Communism gets voted in?"

Sounds silly, does it not?  Those two wealthy dowagers had no idea that the chief pogrum of socialism was a top down forced re-distribution of wealth.  Let's not fault those two old ladies though.  Millions of Americans were equally ignorant and equally wistful for a communist takeover of our temples of wealth and the money changers who dwelled within.

Alas, their naive hopes were shattered when Stalin and Hitler signed their mutual defense pacts.  Communist wannabes ran around screaming that they didn't know...and should have been told!

Until the modern internet arrived in the mid 1990's I always believed that a lack of information caused those otherwise redeeming 30's and 40's dreamers to wish for something that might prove ultimately bad for them.  In other words, ignorance of the facts was a perfectly rational explanation.

Then came the internet and a world of information opened up to what Karl Marx called "the masses".  Through the auspices of AOL and Google and Yahoo the world's citizen could learn everything there was to learn....from the physics of making a nuclear bomb, to the recipe for Granny's strawberry jelly.

Yet here we are....in 2019...and we still have a wide swath of Americans who believe the Venezuelan economic model just needs a little tweaking.  They despise those who have accumulated wealth, even if it was well earned.  They have come to believe that benefits previously thought to be bestowed upon earning it, should not be given to everyone as a "natural right".  As many as half of America now believe that free healthcare is a right, that food and shelter are rights, that those who breach national borders have a right to, and that the wealthy and the worker bees have only one right; to shut the hell up and pay for it all.

So, here's still another thing I've learned from my study of history.  No matter how much information is afforded a human being, a good portion of those humans will don blinders...so that no small inkling of opposing point of view is allowed to distort their narrow little view of how man should be governed.

And when someone yanks their blinders off they cry and scream in front of the Supreme Court, or in the halls of Congress, or out in America's mean streets, their invective always carefully crafted to distort the truth.

Thomas Jefferson feared we would lose our Republic if her citizens ever collected in such numbers as to vote themselves benefits.  John Adams said again and again that Democracy, in man's entire history, had never endured because there were simply too damn many ignorants given the right to vote without a corresponding knowledge to make an intelligent choice.

Both Jefferson and Adams were right.  We have now reached an age where we are being governed by unprincipled plow horses, blinders in place, capable of only aspiring to a path that will eventually destroy us.

Posted by A Modest Scribler at 3:39 AM

It is such a shame that no matter how much information that you give a person on a given subject, if that isn't the way they "feel", then it is lies and untrue. They doen't ever pretend that they know any different, but it is how they feel or what they have heard.

Yep. Way too much touchy-feeling lemmings these days.