The Story Behind "Taps"; The Soldier's Final Lullaby 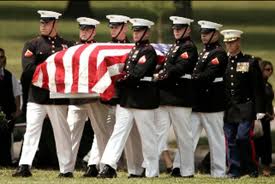 Day is done, gone the sun,
From the hills, from the lake,
From the sky.
All is well, safely rest,
God is nigh.

Go to sleep, peaceful sleep,
May the soldier or sailor,
God keep.
On the land or the deep,
Safe in sleep.

Love, good night, Must thou go,
When the day, And the night
Need thee so?
All is well. Speedeth all
To their rest.

Fades the light; And afar
Goeth day, And the stars
Shineth bright,
Fare thee well; Day has gone,
Night is on.

Just as a mother may sing a lullaby to send her child off to a restful sleep, so too does a soldier's comrades offer a final "lullaby" to a soldier who has gone to his permanent rest.  It is the final honor bestowed upon one who gave a portion...or indeed all of his life in the service of his country.

Taps is a haunting dirge that never fails to raise chill bumps on the arms, and tears in the eyes of those who hear it.

Taps has a long and honored tradition.  It evolved from several variations of bugler calls but the version we hear today was the written by General Daniel Adams Butterfield, Union Army of the Potomac, during the Peninsular Campaign of the Civil War in 1862.  It is said that when Taps was first played it struck at the heart of both Union and Confederate Soldier alike.  Something in the haunting notes evoked love of country, a longing for home and a heart pleading for a peaceful rest from the savagery of war.  Soon both sides adopted Taps.

Officially adopted by the U.S. military in 1874, Taps signals the final goodbye to those who will never see another sunrise.  Our Boy Scouts honor their country by ending their meetings with the first stanza of Taps.  Our nation honors those who preserve it by standing in respectful awe as the bugler plays it.

On Memorial Day, from Arlington National Cemetery to the Presidio, to the Memorial of the Pacific on Oahu, our nation's citizens will once again stand beside the graves of a million men and women and listen to the "soldier's lullaby", saying "all is well, safely rest". 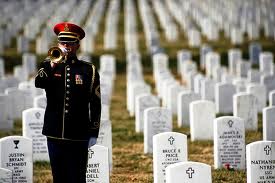 Thank you for that.

Love to hear about our nation's history! Thank you and have a wonderful Memorial Day ~

Thank you Carol...have a peaceful and restful day yourself.

Wonderful Memorial Day to you, Frank.

Well, it was a lovely day but definitely not restful! LOL! Always busy for me. We moved up to 'Rim Country' and I now have a storefront. My house was bursting at the seams, trying to run my business in it. Keeps expanding, which is good! If you ever come up to the Rim to get out of the heat, be sure to stop in & say HI to me and the hubby!

Well good luck with the new move, Carol. I will definitely stop by and say high if I'm ever up that way.