Flowers In The Crack Of The Urban Sidewalk 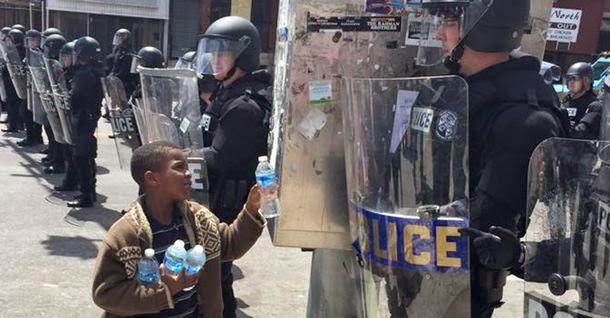 "Flowers In The Crack Of The Urban Sidewalk"
Amidst all the violence on the streets of Baltimore we saw a few lovely flowers growing in the cracks of the urban jungle. Witness the "imperfect mother" who was giving her son some tough love, her love clearly evident as she tried to save him from the streets. I said "imperfect mother" because she's a single mother of six kids with a whole laundry list of different fathers on those six birth certificates. I don't like paying "child support" for them. But more important, all those fatherless kids are why there's trouble in the streets in the first place.

But we also saw humans at their very best; those admirable Black men who formed a line in front of the police to protect them, while saying to the thugs "this is not right...and you aren't "us"..and never will be. Finally we saw that sweet-faced little Black boy bringing water to the police. That one brought brought a tear or two, in celebration for both his bravery and his compassion. It was the Vietnam era equivalent of the young girl who puts a flower in the barrel of a National Guard rifle.

So, while we can all condemn the violence, and we can express our anger at the thugs who started all this, we can take hope and comfort that courage and compassion thrives, even in our country's urban war zones...and sometimes that's all we need to know.
Posted by A Modest Scribler at 2:00 AM

Careful with your use of "thug", that's now deemed a racial slur.
I say if the shoe fits...,.

Have never been reluctant to call a spade a spade, Brian...which is ironically more racist than using the word "thug." Have a good weekend.

Never seen compassion in a situation such as this before. Is the Media going soft?

Don't count on it, Frank. Goodness and kindness neither sells papers nor draws viewer eyes to a channel.