You Know You're A Black Slave On The Liberal Plantation When... 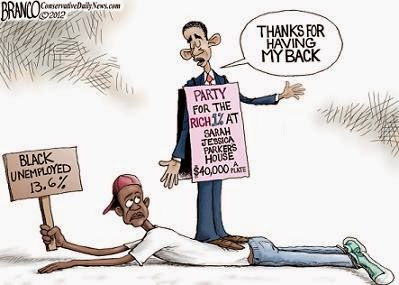 --When Black unemployment is 3 times higher than that of Whites...and you give Barack Obama and his fellow Democrats 95% of your vote.

-- When Black youth unemployment is 30% and Barack Obama wants to grant amnesty to 30 million illegal Mexicans who will take the rest of your jobs...and you vote for him anyway.

--You live in the ghetto and your children have a 50% chance of being gunned down in the streets and the Democrats are too busy talking about climate change to care.

--When when your kids graduate high school and still can't read or fill out a job application and the Democrats keep supporting a teacher's union over the education of your kids.

-- When the NAACP now stands for the National Association for Aborting Black Children.

--When Obama can convince Black churches to surrender the teachings of their own bible and declare same sex marriage a civil right.

-- When your Black churches now accept Big Government as their God...and not the God of Abraham.

--When Black mothers will vote for Hillary Clinton, yet can't cite a single thing she's done to improve the lives of Blacks in New York, or Detroit, or Atlanta, or Cleveland.

And, finally..you know you're a Black slave on the liberal plantation when you'll trade your vote for a free Obamaphone.

I heard an interesting statistic a few days ago. It goes like this: More black babies were aborted in one week of 2014, than all blacks lynched throughout the entire history of the United States!

I wish I could have shouted that out during your interview with the often persecuted Thomas Jefferson, America's Premier slaver (that last, an oft times recorded statistic of white apologists everywhere!)

Ken, what you say is true. But you will never hear that from the mainstream media. Anyone who dare print, or broadcast that 75% of all abortions in America are Blacks would be fired on the spot.

When one can't read, and the only news they hear are from Liberals including the likes of Al Sharpton, then the only outcome will be President Hillary. If you notice, the Republican Blacks are smart, educated and informed. Unfortunately, there's way to few of them. The Elbert Guillory's and Charles Barkleys won't be given airtime by mainstream but hopefully the Repubs will figure out a way to utilize them.

All true, Frank. Fox airs the views of Black conservatives but they are "uncle tommed" right off the air on the mainstream channels. And, yes, I think we're doomed to have President Killary.