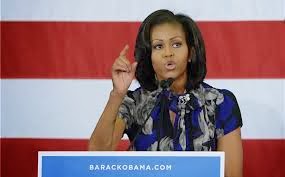 Michelle Obama has been making the rounds of college commencements.  Two weeks ago she spoke to graduates and told them about her own woes of growing up on the wrong side of town. and in poverty.  And why Blacks never get a fair chance.

Fade to reality:  I researched Michelle's lies years ago.  Here's a few facts that you can google for yourself.  Michelle grew up in a respectable, crime free neighborhood.  The large family home was an Arts and Crafts red brick home highly sought by real estate investors. 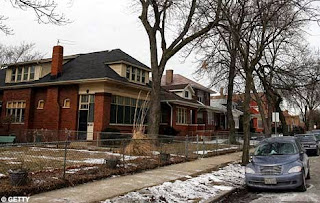 Michelle's dad worked for the water department of the city of Chicago. He made $80,000 dollars a year as a meter reader before being promoted to a supervisor position at the water plant where he was paid $130,000 dollars per year.  Michelle's life only got better.  After marrying Barry, and he got elected to the Illinois State Senate, Michelle miraculously got hired as "eye candy" for a hospital that paid her $150,000 dollars a year.

The two were rolling pretty good, both of them earning six digit annual salaries.  It must have been good because the Obama's hooked up with a convicted felon who set them up with an $850,000 dollar home.  And it got even better.  Once Barry started writing books about his own desperate quest for equality during his Ivy League school tenure, Barry and Michelle were raking in millions.

And, if you read this morning's paper, thanks to the generosity of those Chicago politicians, Illinois has $105 billion in government worker pension liabilities that they can't pay.  Three years ago Illinois doubled the income tax rates on her citizens and it still wasn't enough.  Now that a liberal court has ruled the Governor can't revise those pensions downward the only solution is to raise taxes again.  (Illinois led among all 50 states in citizens fleeing the state.)  While Michelle calls $130,000 dollars a year "poverty", the taxpayers of Illinois only wish they were that poor.
Posted by A Modest Scribler at 2:00 AM

The Obama's are still trying to be "one of the guys". Not sure their motive unless they're trying to NOT be viewed as Uncle Toms. Got to stay Black even if we're rich.
Now the Clinton's are another story. Trying to vilify the 1% even though they are FIRMLY entrenched as charter members of the 1% group is so stupid it would be funny of it wasn't so brazen. Most Americans would/should be insulted by their infantile attempt to "fit in" and be one of us. These two exemplify the term "Ugly American". Our founding Fathers will roll in their grave if this Liar/Cheater gets voted in as President.

Brian, me too. In fact, I'll settle for half.

Frank, the Clintons have thrived and enriched themselves through the greed of those wanting "access" and through the utter stupidity of a good hunk of the American people. Oh, and by the way, our forefathers have been spinning in their graves for the last seven years.

They've been "turning" in their graves. Hillary will make them spin....

Nothing new here, just the same old double standard (libs get a pass on being rich, R's are indicted for it). What strikes me is the similarity between both the Clintons and the Obamas - both couples are obscenely wealthy due to ... what?, yet neither of them posses even a smidgen of class. Sad that the likes of this infests the WH.

Randy, both are worse than trailer trash...none of them ever held a job in their entire lives.