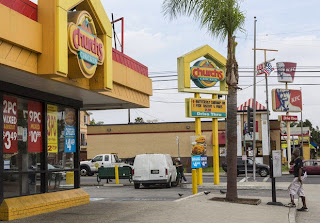 In 2008 Los Angeles's government masters had a brilliant idea!   They took a look at their public medical costs and found that Blacks and Hispanics down in South Central Los Angeles were really fat and were causing the city's share of the costs to soar.  Hospitals and school health professionals were reporting alarming rates of adult obesity in both adults and children.  Thousands of kids were showing up in hospitals with adult onset diabetes in ages as young as twelve years old!

Well, their great liberal Mayor, Antonio Villaraigosa immediately blamed the fast food restaurants..after all in South Central and every other urban center in America, everyone's a victim and bears no responsibility for what happens to them.  So the Mayor and the City Council got together and banned any new fast food licenses in South Central.  And they began looking hard at re-newing fast food business licenses for the ones already in place.   Many fast food outlets just pulled out entirely.  The ban applied to a 32-square mile area of central Los Angeles.

Well, after implementing the law, the Mayor contracted with the Rand Corporation, paying them tens of millions to monitor obesity rates in South Central.  When the law was passed in 2008 South Central's obesity rates were 63%.  So imagine the liberal's surprise when, after five years of the junk food ban, Rand reported the final results.  Now 75% of South Central is obese...a 12 percent increase in five years!

Alas, it seems that Jamaal and Jose were simply driving a little further out to slap their food stamp cards down on the counter and buying their Big Mac's and buckets from the Colonel!

At no time during those five years did any government official step forward and tell their citizens that THEY should take charge of their health.  No one proposed a co-pay to offset the billions in medical costs for those minority obese.  No one said "eat a salad."  No one said "take a walk."  No one said try the roast chicken.  And they certainly did not suggest that getting a job burns more calories. Nope...that would be insulting their constituents...and you don't get 90% voter support from insulting your constituents.

"You want mash potatoes and gravy with your fried chicken, big guy?"
Posted by A Modest Scribler at 2:00 AM

Hi.... Yes the plan was a little short on offering alternatives for taking the fast food away and teaching was not offered in the Spanish language. Again big brother again at work but forgot a few details. Michelle must have been part of this.

Hi.... Yes the plan was a little short on offering alternatives for taking the fast food away and teaching was not offered in the Spanish language. Again big brother again at work but forgot a few details. Michelle must have been part of this.

If you look in your Webster Dictionary, you'll see one of the definitions of Government is: "A body of Individuals voted in by the people who's main function is to create worthless programs, spend obscene amounts of money on nothing useful and to be Stupid. Look it up. If it's not there, than it's just an oversight....

The comments from the esteemed LA city council, when presented with these facts, were downright funny: "Nobody ever said this would cure the problem entirely. This is simply the first step in addressing a problem that needs to be acknowledged and addressed." The interviewer asked the CC drone if they were considering eliminating the restrictions on fast food restaurants since the results were the opposite of what was intended. "No" was the simple response. Much like gun laws and taxes, once implemented, government regulations never go away. Yet the LA voters put these mental midgets in office time after time....

Randy, liberals always stick to their position, time and time again, even when they are proven wrong.

As ridiculous as this all sounds now it's only the beginning. A beginning I thought
took place awhile ago, but we just keep finding new starting points it seems out here in what was once the greatest state in the nation and possibly the greatest country in the world (comparatively). Once the gerrymandering began and the democrats, quite illegally I would think, made us a single party government, some of the most outrageous laws, measures, etc., have really made us a laughingstock like no other on the face the planet. The food laws of South Central L.A. are not any different than all the other ridiculous laws in different municipalities all across our state. What never ceases to amaze me is the stupidity of the voters occupying this state. Antonio Villaraigosa came to office only because of the illegals who voted for him in record number. After all it was the first mexican coming to power in the city overtaken by illegals. The very first thing that happens are the stupid laws. Put there because our leaders are much wiser than we and they seem to be getting wiser each election cycle knowing what I should eat, drink, watch on tv, smoke, what car I should drive, etc., etc.. I quit smoking in '94, right around the time the heavy taxation took place. Now the only people really stupid enough to be smoking are the people stupid enough to vote for the like of Villaraigosa. I think it's pushing $6 a pack around here. Booze is enormously expensive. The lottery is played in overwhelming numbers by the poor folk who are the last people who should be playing it. It really broke my heart to see this state legalize the casinos. Now they are in almost every city and country side. Who plays in huge numbers? You guessed it, the welfare collecting mexican and black in overwhelming numbers. It really is sad, that these people are so stupid they can't even see it while watching their last welfare dollar or paycheck be handed over to the blackjack dealer. It now costs an additional $1.68 for a six pack of coke in Berkeley, I don't recall the reason for the measure, only that it brought in an additional couple million in the first quarter this year. I need to carry a bag in my truck or I get tagged $.10 for a bag from the cashier at all stores now. I asked why do I need to pay for it, why can't the store pay the ten cents. That is against the law, I am being trained by jerry brown's brown shirts to be more ecologically aware at what I am causing to be put into our landfills.......and on and on and on and on and on

It is just heartbreaking. We have been taken over by a generation of undereducated, internet addicted idiots who will do whatever the mark zuckerberg of the day tells them to think or do. I do so wish I would have gone with John Wayne on our horses into the great mountain ranges in the heavens.

BTW, I heard an interesting and frightening statistic today. The country of mexico, one of earth's more overpopulated countries now boasts that 25% of their entire population has now relocated to the USA. The great country they come to get every freebie they can find, and then profess their hate at all the rallies.

Damn, Ken! I thought mine was depressing!