"Death of A Flying Minister" 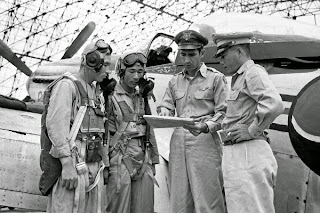 One Saturday, on my last tour of Korea, I found myself walking into an arts store in Song Tan, South Korea.  The artist owned store had lots of paintings of Korean landscapes, portraits of Kennedy, and Hemingway and Reagan, surely commercially done to sell to rich Americans.  But what intrigued me was several paintings hanging on the wall of an American pilot.  Below them were some sculptures of the fellow.

When I asked the proprietor of the store about them he said they were representations of a Korean war pilot named Dean Hess.  I knew nothing about the history of this Dean Hess...just figured he was an Ace or something, and thought no more about it.

Then, several years later, while reading about a history of the Korean War, up pops the name of Dean Hess.  Seems Colonel Dean was a young fellow who graduated from college in June 1941, intending to enter the ministry.  Those plans were derailed after Pearl Harbor.  Dean joined the Army Air Forces and was sent to flight school and became a pilot, sent to Europe where he would fly 63 combat missions, including sorties on D-Day.

After World War II, Dean came home and settled into civilian life, only to be recalled to duty in 1948 and assigned to the American occupation force in Japan.  At the outbreak of the Korean War, Dean was sent to Korea, to train Korean pilots how to fly the P-51 Mustang.  By the time Dean arrived in Korea he had flown over 250 combat missions. And it was in Korea where Dean would display his greatest heroism.  When South Korea was overrun by North Korea, thousands of children were left orphaned.  Many of these orphans ended up on an air base, to be cared for by American G.I.'s.  But, fearing for their safety, Dean organized what became known as "Kiddie Car Lift", employing American C-54's to ferry 950 of these children to safety down to Jeju Island.

After the war Dean went back home, but this time stayed with the Air Force.  In 1956, between flight duties, Dean would write of his experiences and it was published under the title "Battle Hymn", which later became a movie starring Rock Hudson.  Colonel Hess took the profits from the book, and advances on the movie rights, and went to Korea and built an orphanage for Korean orphans.  Colonel Hess continued to serve with the Air Force, retiring in 1969.

So, this morning I came across a little ditty of an article that announced Colonel Dean Hess just died on March 06, 2015, at the ripe old age of 97.  He had ended up finally entering the ministry after his Air Force career, ministering to his flock just outside Dayton, Ohio, home and birthplace of flying.  No doubt Dean Hess still flies...just with another set of wings.
Posted by A Modest Scribler at 2:00 AM

Thanks for the good uplifting morning read.

Here is one of the reasons I love stopping by your column. So few people retell these stories anymore, I guess because of the possibility it might convince folks of the worth of a Christian lifestyle.

This man is truly amazing from your telling of his contribution to the betterment of the world. I will enjoy reading about him in the near future. Again, thank you so much for taking the time to post these stories of the good people among us!! I believe you may be one of 'em.

Thanks, Ken. I'm glad my posts help lift your spirits and provide a little hope.