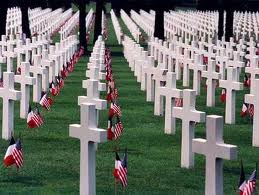 In an earlier blog entry ("Fighting for Pie") I wrote about what motivates an American to fight for his or her country.  I wrote about all that we endured in following the long tradition of citizen soldiers who came to their country's defense.  Think of all the disparate places our young men, and now women, have gone to serve an American cause.  Those shoeless soldiers at Valley Forge lit the way for all of us who followed...from Trenton to Gettysburg, to San Juan Hill, to the battlefields of France, to Omaha Beach, to Pork Chop Hill, to the jungles of Da Nang, to the deserts of Arabia and the mountain trails of Afghanistan, Americans have marched, crawled or ran across vast sweeping landscapes in defense of our country.

As we Americans gather today to walk the graveyards of Normandy or Arlington or the thousands of resting places across America which host our nation's fallen, I can think of no better tribute than to understand what our soldiers endured and why they continue to do so.

My fellow Americans, truly, the grand parades and marches, the many Memorial Day concerts and the stirring John Phillip Sousa music is for you, not the soldier.  Of course, we have marched in column-swift unison across numerous parade grounds as we graduated from military schools and academies which span our nation.  Often the stirring music gave us a little extra bounce to our step, as we, wearied from weapons and tactical training, participated in the necessary ritual of pomp and circumstance that our military tradition expected.

But, when the music stopped and all the parade goers go home, we awaited a call of duty which dispersed us to the far corners of the globe.  No drums or trumpets for us as we manned lonely outposts in war-weary Europe or the humid jungles of the Pacific or Vietnam or the 125 degree heat and desolation of desert.  No bleacher cheering or confetti-strewn parade as our soldiers traversed bungi sticks and land mines and hostile fire.  No folks, all the marshall music and remembrances are for you, the "home front".

I served for 22 years and not once, while serving in Vietnam or Korea, did I hear a single soldier say "boy, I could really use some John Phillip Sousa music right about now".  Instead he awaits...no he longs for..the letter from home, the new pictures of Mom and Dad and Wife and Children.  He eats military rations and pines for a good old American hamburger and fries.  He sees a child in a war zone and thanks God that his is living in freedom and safety and security back home.  And he believes, with all his heart, that his service is making that safety and freedom possible.

Since that first shot at Concord, millions of Americans have given their lives to preserve the American way of life.  Tens of thousands of these young people are buried in foreign cemeteries, never making it home to rejoin his family and his community or for that hamburger and perhaps a night at the movies or a ball game.

For those of us who were fortunate to come home, the first contact of our boots to American soil, the first breath of American air is reward enough.  The first embrace of a loved one is a sublime tactile experience.  And, most of us will never look at an American flag without feeling in our hearts a deep and abiding love for it.

So, my wonderful American citizens, spread out the blanket, strike up the band and put the hot dogs on to grill.  I think any American who gave their life for this wonderful country would want you to carry on the grand tradition.  But take a brief moment to remember all of those who endured severe conditions, pain, loneliness, and ultimately, gave their lives so that you can do so.
Posted by A Modest Scribler at 1:16 AM

this had me in tears. thank you.

Anon; thank you for appreciating the service we gave.

oh, you have no idea how much i appreciate. every day.

Salute to you as well grenadavet!

I think of what these Americans went through, from my father who was at Okinawa and my uncle who escaped a German POW Camp. Silent Heroes who are now silent forever but gave up part of their life so we could live ours in freedom. Thank you to ALL that served and are serving now,

As usual,, straight to the heart,, thanks to you and all the others who have sacrificed so much for our freedom!

Thanks, Darlene. Have a great weekend!