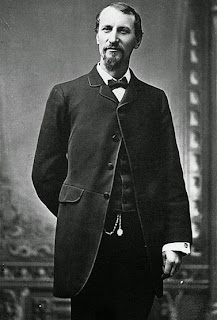 One June morning in 1853 Fred rose from his bed in a flophouse in Liverpool, England.  He washed his face and donned his best suit of clothes, grabbed his satchel and walked down to harbor and jumped on a ship bound for America.  Just 17 years old, Fred knew he would never succeed in class conscious England so he set his sights on America.

He arrived penniless in New York City and wandered the streets, taking in the sights and sounds of the city.  While walking down the avenues he stopped to watch folks lining up to eat in a popular restaurant.  His hunger drew him to the front door of the eatery, where he spied a "kitchen help wanted" sign out front.  He went in and took the job as a pot scrubber for ten cents an hour and a free meal.  Fred liked the owners.  He saw how they conducted business with suppliers by the simple means of a handshake.  He was fascinated by how they sought out the freshest meats and produce, and realized this was the key to the restaurants success.  Fred turned out to be the establishment's hardest worker.  Soon he was promoted to bus boy, then waiter, and finally to line cook.

But Fred was a young man with itchy feet.  He left New York and travelled down to New Orleans.  It was there that Fred nearly died from a bout of Yellow Fever.

Still weak but recovering, Fred moved on to St. Louis, Missouri.  He secured a job in a jewelry store and it was there he would meet Barbara Sarah Mattas and fell in love.  They married and Sarah would, over the years, give Fred six children.

Although Fred prospered in the jewelry business, his heart was still telling him that food service was where he was destined.  So, taking a partner, Fred opened a nice little restaurant.  He incorporated the philosophies of that New York eatery where he first gained employment, buying only the freshest ingredients and serving great meals served with efficiency.  The restaurant thrived until the outbreak of the Civil War.  His business partner, sympathetic to the Confederacy, absconded with all the cash and left Fred broke.

Now desperate to support his family, Fred took a job as a rail road freight agent.  The job required him to travel and Fred was disgusted with the poor eating conditions the traveller had to endure, especially in the American West.  At the time the railroads had not yet established dining cars so travelers would get off at stops and grab a meal of rancid meat and soured beans at a road house, then hop back aboard, taking their Ptomaine poison to be treated somewhere up the line.

So, Fred had an idea.  What if he could set up train side eateries that could provide a fresh, hot and healthy meal, and do it within a 30 minute train stop?  He approached his railroad overlords with the idea but they rejected it; they were doing just fine moving travelers own the line..that was their business and they cared for nothing else.

But Fred persisted and convinced another railroad line that they could encourage tourism if travelers could be assured eateries were available along their route.  So Fred went into partnership with the railroad and opened three of the rail side restaurants.  He cut a deal where he got free rent from the railroads which owned the property where the eateries were built and even secured free refrigerated shipments of fresh meats and vegetables and milk right to the train station.

Fred knew that he would have to invent a system that was so efficient that customers could eat a healthy meal, in a clean eatery, and at a reasonable price...and he had to move them in and out within the 30 minute stop the railroad allocated for food and rest stops. 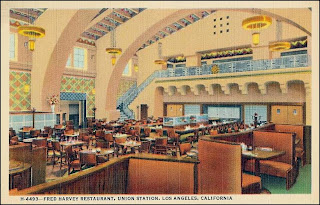 So Fred drilled his line cooks and wait staff and clean up boys like an army drill sergeant.  While the old roadhouses were staffed by surly waiters and poor cooks in the back, Fred insisted on the best.  Often, especially in remote places out west, there simply weren't enough workers to draw on from little towns that might have 500 people at most.  So Fred put ads in the newspapers all over the Eastern seaboard, to recruit young single women, must be pretty, well bred and educated, and offered the then princely sum of $17 dollars a month, with free room and board and they got to keep their tips.  The young ladies came in droves.  Fred dressed them up in black and white uniforms, the hems not allowed to rise more than eight inches from the floor.  And Fred monitored their behavior like a sorority mom and made sure they maintained high moral standards.  Alas, Fred was so efficient at attracting pretty young girls that many of them ended up marrying their customers so Fred had to recruit often.

Eventually Fred would open restaurants throughout the West and would be the first in America to have established a national franchise.  He then expanded and opened hotels all along the railroad lines....places that were clean, affordable, and offered the same high level of hospitality as his restaurants.  He would gain fame as "the man who tamed the West"...who provided the opportunities for travelers to eat and sleep in comfort.

His pretty young ladies would be named Harvey Girls (and Judy Garland would star in a movie of the same name) and his Harvey Houses were renown and admired all across America.

Those Harvey Houses and Harvey Hotels would endure for more than 75 years, long after Fred Henry Harvey was laid to rest.  The chain would later be bought out by a hospitality conglomerate in 1969.
The kid from Liverpool who arrived in America penniless would leave a legacy of fine hospitality that endured.

As with so many American immigrants, Fred Henry Harvey would leave an America a much finer place than when he arrived in it.
Posted by A Modest Scribler at 2:00 AM

I have always loved the story of this man's drive and success. He is the epitome of the American success story. Find a need, make a plan, stick to it, work hard and long hours at times (most times), pray for some lucky breaks and hope the good Lord sees fit to bless you with some. He adapted through changing times in our young country and created a business that survived some really hard times. Didn't the Harvey Houses or maybe with different name survive all the way into the 1960's? Just amazing.

When I hear politicians and college graduates spew forth nothing but hopelessness with statements like, "the American dream is dead". When in fact all around us are stories of people like "Fred" doing it again when our government is doing all it can to make it harder and harder to succeed. Obstacles are always thrown in the way of a person trying to succeed in this country but this is the only country that you can still enjoy great success in spite of our oppressive washington slobs and social experiments. While waiting for my doctor this morning I read an article about Travis Kalanick, the CEO of the UBER company. He designed a fairly easy to use APP for your smartphone that brings you transportation to your door in minutes. From that he has spawned several spinoffs that now are competing with Fed Ex and UPS, food delivery sevice that brings you hot dinners from your favorite restaurant, he's started a document messenger service in New York City, etc., etc.all successful. This man went from a town car service that he drove for himself to a service that is found in almost every city around the world and the company is now valued at over $30 billion dollars. The American dream is dead??? Hardly, lazy bastards need to shut the f**k up and put the proverbial nose to the proverbial grindstone and quit asking someone else to do your heavy lifting.

I'm done and thank you again for that inspiring story!
I hope all is well in good ole Arizona!