"Thanks For Your Service..Now Go Home And Die" 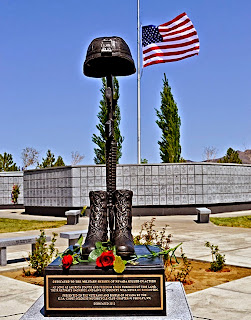 Gene Spencer seems to have been a "man for all seasons"; a multi-talented and ambitious man who touched the lives of many.  He started out humble enough; graduated from Central High School here in Phoenix, went on to Arizona State, getting a Bachelor's Degree, then on to the University of Arizona for a Master's Degree in Audiology.

Before Gene could put all that education to work he was drafted into the military in 1968.  After he served his hitch he came home and served as an audiologist on poverty stricken Indian reservations, administering to people who needed his help the most.

Gene would later go into business with his brother, as building contractors.  Between the two of them they would put up more than 3,500 homes and businesses across the state.  Gene's life was complete when he met and married Shirley.

Gene could never tell Shirley enough how much he loved her.  Every morning he got up and wrote her a love letter and Shirley would find love notes all over the house..often in the most unlikeliest places.

In 2010 Gene began feeling a little under the weather.  So he made an appointment at the Phoenix VA hospital where he was diagnosed with colon cancer....and was given six years to live.   As frightening as the death sentence was, Gene and Shirley bravely faced it and began living out their bucket lists.

As you can imagine, this is not a happy story.  And the unhappiness began when Gene began reporting to the VA for various treatments.   First, no one at the VA was monitoring Gene's radiation treatments...so they over radiated him until he nearly glowed in the dark.  He was also going through the agony of chemotherapy.  The excessive radiation left Gene often in so much pain Shirley would find him in the backyard, curled up in a fetal position, not wanting her to see his pain.  When Glen couldn't get followup appointments to the VA hospital he would often report to the VA Emergency room where he would be turned away and advised to get an appointment.

Despite the pain, and VA malpractice, in 2012 Gene and Shirley continued with their bucket list.  One of them was a trip to Hawaii.  But, one day before they were scheduled to fly out, Gene began experiencing shortness of breath.  Back to the VA hospital where Gene was X-rayed and administered a procedure to drain fluid from his lungs.  However, during the probe the surgeon accidentally punctured Gene's lung, causing Gene's lungs to completely fill with fluid, making the situation worse.  The surgeon admitted he made a mistake, then said he'd have to undergo a second procedure to drain his lungs.

However, before that second procedure took place, someone took a look at Gene's X-rays and confused lung fluid for cancer and called Gene in to give him the bad news...they told Gene to go home and get his affairs in order and wait for death.

Gene did go home but was in so much pain from the collapsed fluid-filled lung that he could barely tolerate it.  But he still had enough strength to sit Shirley down and apologize for not having the time left to finish their bucket list.  He then apologized for having to leave her early.

The next day Shirley had to go out and run an errand.  When she returned the front door was open and she felt a foreboding as soon as she entered the home.  When she looked down the hallway she saw bloodstains as far out as the hallway.  Shirley called 911, then called the VA hospital to let them know Gene would need no more chemotherapy.

Even then, it seems the VA doctors don't talk much to each other.  The next day Gene's surgeon called Shirley and said "I have such great news for you and Gene...that fluid around the lungs is not cancer."  Shirley could only reply "Well, if you folks ever looked at your files you'd know Gene is dead."

Yes, this is the same VA hospital that turned away hundreds of vets, who falsified appointment records, who turned away vets in wheelchairs, literally spinning them around and wheeling them back out the door of an Emergency Room, who wheeled an elderly vet up to the rooftop patio and forgot about him for 12 hours, only to find him dead from the oppressive heat of an Arizona summer, the same VA hospital who were responsible for dozens of vet deaths because they just didn't have the time for them.  And, yes, the same VA hospital that awarded hundreds of employees with performance bonuses for meeting falsified appointment schedules.

Meantime, Shirley wanders about her home, reaches up to pull a book off the shelf..and finds still another love note from Gene.

Appalling! The way veterans are treated is beyond words. Had the same story been about an illegal criminal, everyone would have bent over backwards to take care of him. Prison seems way to light of a punishment for all the people involved in the V.A. mess.

Agreed. I think we should switch positions. Illegals get the V.A., Vets get free access to Hospitals and care. e have our priorities screwed up. One simple change will cure two problems. Vets get excellent care, Illegals go home after VA screws(would have used F-cked them up but this is a family blog) them up.

And yet we have billions to rebuild Iraq or this and that country who will always think of us as the enemy, no matter how much effort and money we expend. Our Congress should all be thrown out and we start over. On a different note, your column yesterday was beautiful and reminded me of my own mother. I was working and had no time to comment.

You're right, Jeff. Politicians never calculate the full price of war...and they always want to wage it at 50% off...hardware yes, personnel, no. And thanks for the nice comments on yesterday's blog.