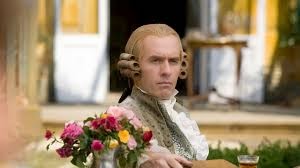 Preface:  As many of my readers may remember, I was fortunate enough to score an interview with the late founding father Thomas Jefferson back in 2013.  I just happened to be touring Civil War sites in my mini-RV, "Rocinante", when I decided to make a side trip to Monticello, Jefferson's home.

I remember it was a cool, crisp April day as a group of us visitors followed a tour guide of the home.  As we entered the home the tour guide pointed out various artifacts collected by Lewis and Clarke during their Voyage of Discovery and given to Jefferson as a reward for making that exploration possible.  Sketches of Grizzly Bears, various bird species and elk antlers were prominently displayed on the walls of the living room.  And Jefferson's own inventions, the seven day clock and a contraption that ferried food and drink to the upper levels of the house were on display.

Despite the many wonders of Monticello, I was saddened to learn that our little group was populated with simpering little liberals who kept whispering and giggling over the prospects of where Sally Hemmings might have slept in the house.  Others were "tsk-tsking" a Jefferson quote mounted prominently above the fireplace.  The quote read "when citizens are enabled to vote themselves benefits, then we are no longer a Republic."

Well, I tired of the liberal simpering and wandered off by myself, out to the back of the home, to the grave where Jefferson rests. 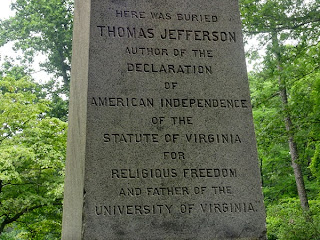 As I stood before the grave I felt a great rumbling and suddenly Thomas Jefferson himself came spinning up through the ground and stood shaking and disheveled before me.  His reddish hair was in tangles and his burial suit was a bit tattered.  But, most pronounced, was the look of anger on Jefferson's face.

When I asked him if we was alright he huffed a bit and said "No, citizen, I am not alright....how would you feel about having a horde of empty headed liberals traipsing about your house?"

I gave old Tom my most empathetic apologies and asked if he might be amenable to having a cup of coffee...or perhaps a glass of burgundy.  At this, his eyes lit up and he readily accepted my offer of hospitality.  As I led him over to my RV he was still complaining.  He said "the worst part about being dead is having these Democrats invoking my name to justify their big government power grabs...me who despised the oppression of a federal entity!"

As I threw the door to my RV open, and we stepped in, Mr. Jefferson was impressed with the economical use of space inside and marveled at all the modern conveniences.  Before I had time to pull the wine out of the fridge, Jefferson looked out at the mob who were now descending the hill behind his home and asked if we might go somewhere quiet to enjoy our wine.  He then suggested his second home down at Poplar Forest.  I acquiesced and Tom gave me directions as we motored down secondary roads that still bore a resemblance to the trails he once followed in his own time.

After a time we arrived on the grounds of Poplar Forest and I shut the engine off and we again climbed into the back and took seats opposite each other at the table.  I broke out the wine and poured for each of us and that was the beginning of my three day interview with the author of our Declaration of Independence.  (You may type "Thomas Jefferson Interview" in the search block of my home page to reacquaint yourself with Jefferson's thoughts on 21st century America).

During those three days I felt as if I had been personally enlightened by perhaps the greatest scholar America has known.  I felt great kinship with a man who spent his entire life advocating for the triumph of personal liberties.  Alas, after our talks, it was time to return Mr. Jefferson to his ancestral home, but not before I wrote my phone number down on a slip of paper and handed it to Mr. Jefferson.  "Please call me if you ever again have the need to vent",  I pleaded.   After we shared half a carafe of Chardonnay, Jefferson bid me adieu and climbed the hill, rounded the house and, presumably returned to his rest.

So, imagine my surprise, some two years later, to get a late night call from Mr. Jefferson himself last night!  "Good evening, citizen!" were his first words spoken into a telephone!  A bit taken aback, I asked him how he had managed the phone call and where he was calling from.  He said he'd found a few rolls of Jefferson nickels in a glass display case up in his upstairs study and had set off to find a telephone.   He told me he was calling from what looked like a traveller's rest stop off of Route 95 in Virginia.

When I attempted to inquire further he stopped me and said "withhold from the inconsequentials"..I have a message for you to convey to your government masters!"  "Tell them I insist they stop invoking my name to enlist support for their mad grabs for power!"  "Why, just this week, over in Wheeling, there's this sot by the name of Clinton who is insisting that government can do more, that government is the answer to your societal problems..tell them to stop it, I say!"

At this we were interrupted by an operator somewhere, directing Tom to deposit more money in order to continue his call.  After an interminable time, the sound of Jefferson nickels falling into place, Jefferson came back on the line.

"Listen, citizen!  America is in dire straights..trouble I've not seen since Adams enacted the Alien and Sedition Acts to quash criticism of government.  Thousands went to prison simply because they dared to criticize the President or those boobs in Congress!"  "You are getting perilously close to that now!"  "I am now witnessing that same heavy handed oppressiveness as your President issues unconstitutional Executive Orders and your Congress and Courts issue mandates infringing on both personal and religious liberties...tell them I never advocated for government to deny religious liberties..I simply supported a citizen's rights to worship as he pleases..and certainly didn't intend for the government or the courts to ban religion from the public square!"

"What in the world have you people wrought here in the 21st Century?"  "I see your liberal elites assume powers neither favored nor bestowed onto them by our grand Constitution!....."what has happened to the American spirit?"  "Why such apathy?"  "Need I remind you of the fall of Rome to the barbarian hordes?"  "Need I remind you that, a little more than half a century ago that lout named Hitler came to power while citizens slept in stuporous apathy?"   "Did you folks think I was kidding when I said "for the Republic to survive the blood of tyrants and patriots will be required to maintain your freedom?"

At this, the operator again came on the line, demanding coins.  Then Jefferson's voice; "I am without!".....at this Jefferson said "Citizen, I'll get back to you!"

So, here I sit, waiting by my phone...hoping old Tom isn't cruising a rest stop parking lot for "spare change."  I'll let you know if he gets back to me.

I remember those interviews, they are some of my favorites of this blog.

I enjoyed those interviews immensely!

Thanks, Brian and Carol...for remembering.