When Will They Ever Learn 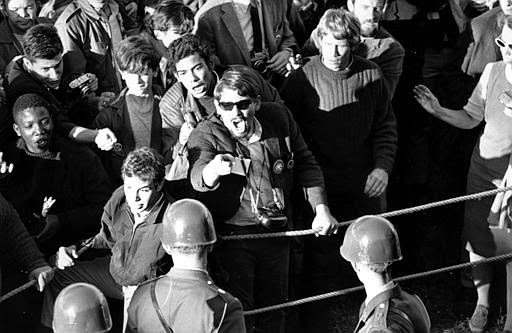 In November 1971 I finished up my three tours in Vietnam and the Air Force assigned me to Castle Air Force Base up in Atwater, California.  During my last six months in Vietnam I was an intelligence courier for 7th Air Force.  My job was to drive a jeep from Tan Son Nhut Air Base to the Cholon District of Saigon where I would pick up field intelligence reports for an army intelligence unit, then return to base.  It got to be pretty hairy.  Students from Saigon University were out in the streets protesting the war by throwing molotov cocktails at any American G.I. traversing Tru Minh Key Boulevard, the route I had to take every morning.  As I dodged their fire bombs the only thing I was thinking was "get this last tour over with so I could get home"...if they didn't want us here we should leave.

So, I finally did get home, breathed a sigh of relief and, though I did have the alarming habit of hitting the floor whenever the noon siren went off on base...the same siren that rang out when we had incoming rockets or mortars in Vietnam,  I was relieved to be home with my own people.  What I didn't know in those first few weeks was that my own people hated me too.  Seems the kids from Stanislaus State and Merced College got their kicks by forming up on weekends at the main gate of Castle Air Force Base to throw bottles and rocks.

So, from around Christmas week to Easter I put in a full week of regular duty, then on the weekends donned riot gear and manned the base perimeter to prevent anti-war protestors from entering the base.  As I stood there, absorbing the blows of bottles and rocks, from kids my own age, I couldn't help but think the world had gone mad.  Not one kid stopped to think that it was the politicians that started the war, that it was the politicians who drafted a million young Americans to fight their war, and that if they had a beef, it ought to be with the politicians.  But, because the politicians were dining with Dow Chemical lobbyists in Washington, far from the "front lines"...just as they had been far from the front lines in Vietnam, we G.I.'s were the next best thing; readily available to be spit upon as we traversed America's airports to go home...and readily available to stand on the perimeters of an air force base to be pelted with bottles and rocks.

So...more than 40 years later I see those cops standing on the streets of Baltimore, getting pelted by bottles and rocks, and I know exactly how they are feeling.  To quote an old Pete Seeger song; "when will they ever learn."
Posted by A Modest Scribler at 2:00 AM