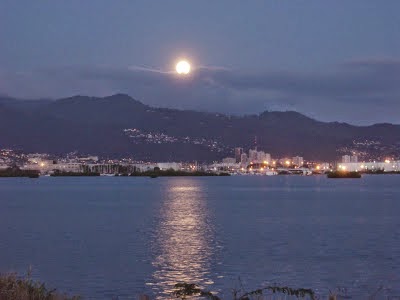 4th of July holiday, 1986....I'm pulling part time security duty for some extra money at Honolulu International Airport. The Security Supervisor walks in, holding two tickets to see Sinatra at Aiea Stadium on the 26th. Sponsored by AT&T, the Sinatra concert had been sold out..so I said "how much?". He gave them to me and wouldn't take any money for them...said he couldn't make it, may as well give them to someone who would enjoy them.
So, I go home that night smiling. I ask my wife if she wants to go...she says "Who's Sinatra?" and "no thanks". So I call my buddy Gary and asked if he wanted to go. After he stopped stuttering he said yes.
So, on the night of the 26th, Gary and I set out early for the 8PM concert. We park, then work our way into the stadium where we are joined by 25,000 other lucky ticket holders (Frank wanted to keep the crowd "small and intimate.") The stage is already set up on the 50 yard line and the Honolulu Symphony is still in harmonic chaos as they tune their instruments and wander around the stage. Gary and I work our way up to the top of the stadium and we look out on a 3/4 moon bathing Pearl Harbor in moonlight. The trade winds have set the palm trees to dancing and there's a cool breeze coming in off the harbor. We look north, up ten miles or so, to the north shore, where Sinatra made his showbiz comeback in "From Here To Eternity"...he'd win an oscar for it. 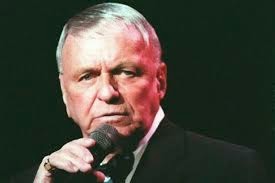 Now Frank is old, has already retired a couple of times, no longer makes movies and lives off the kind hearts of folks like me who knows Frank's music will never get old. Someone opens the show for Frank (I can't remember who)....so when we hear the first strains of music we work our way down to our seats.
When the opening act is over the place goes dark. Then, a single spot light hits stage center and the Chairman of The Board takes the stage. After long and extended applause, Frank opens with an upbeat number; "LA Is My Lady". His voice sounds like he's put away a quart of Jim Beam and smoked a pack of Camels...but somehow it doesn't matter...he's still got that well choreographed shoulder sway and his fingers snap to the beat and he's still "cool". After the applause dies down the spotlight diminishes a little and Frank begins a ballad; "What Now My Love?" and his voice is husky with the angst of love affairs with a few wives and a lot of girl friends. Magic again.
At song's end, Frank walks over to a little table on stage, takes a drink of something, then swings into "A Summer Wind", made more meaningful as the palm trees sway in the night and plumeria wafts through the open air of the stadium. Then, as Frank begins to cover some of his old 40's songs; Cole Porter and George Gershwin stuff, he almost appears to shed 20 years of his age....alternately singing Swing...or slow sad ballads from a smoky late night bar. He takes us up with Swing...and then down with the ballads. Then up again with "New York, New York." Finally, we know it's almost time to say goodbye as the first notes of "My Way" begin. He sings that song like he believes it, and like he lived it...and we believe him.
The spot light disappears and the stage is dark...and 25,000 people begin screaming for just one more song. So Old Blue Eyes comes out and rocks the place with a hot and lively "Mack The Knife"....then once again disappears, this time for good. So the 25,000 of us rise from our seats, and begin filing out of the stadium...not a few of us humming "I've Got You Under My Skin." Quite an enchanted evening in an enchanted place.
Posted by A Modest Scribler at 2:00 AM

They don't make them like "ol Blue Eyes" anymore. He transcended generations.

Yeah, he was a great one, Frank. His music never goes out of style.