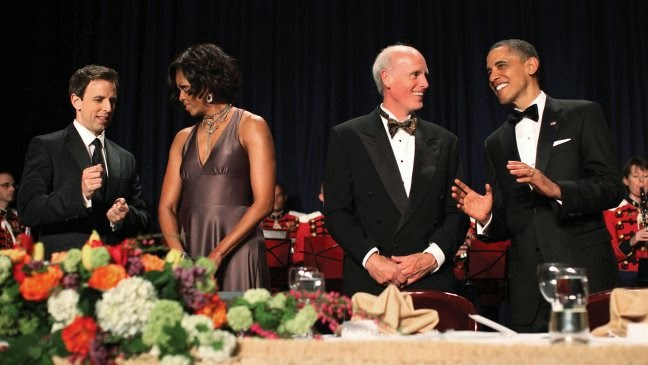 Well boys and girls, this weekend will be brightened by the annual White House Correspondents Dinner...you know the one....it's the liberal press's opportunity to pay homage to their "dear leader".
It's that wonderful time of year when Hollywood, TV talking heads and the Knights of The Keyboard all get together to celebrate their "wonderfulness".

They always hire a liberal minded comedian who will poke gentle fun at their dear leader and then spend the rest of the time skewing Republicans and Fox News.  Then it's time for Obama to step up to the dais as Chris Matthews gets a tingle running up his left leg, as he pisses down the right one.

George Clooney will be there and Andrea Mitchell and Mika will swoon.  Lindsay Lohan will be on the arm of Tom Brokaw.  Last year there were more breasts exposed than on a Tyson Arkansas Chicken Farm as all the Kardashian women attended, for what reason no one ever explained because they can barely puzzle out the words on a voting ballot.

The night will be fraught with mirth as the best Hollywood comedy writers have given Obama a good string of jokes...and he'll improvise and offer a few himself, all of them directed at Fox News.

The Obama years have seen the WHPD bloom as the mainstream media now have the cool, hip Barack Obama to satisfy their diversity needs.  In fact, I was just reading the day's schedule over on ABC News.  There are several "pre-dinner" dinners being hosted by various liberal interest groups.  La Raza is pairing with Chicanos For The Cause to host an enchilada bake and they have cordially invited the two dozen illegal Mexicans who take turns fasting out on the Capitol Mall for the event.

Former NYC Mayor and multibillionaire Michael Bloomberg will be hosting an "after dinner" dinner where he will raffle off sixteen ounce Pepsi's and a 200 free billable hours with an immigration lawyer for any illegal who wishes to attend.

And, just as is custom with the State of The Union Address, one member of Obama's cabinet must deploy to a safe and secure area to represent the Executive Branch if a nuclear bomb is dropped over the Washington Shorham hotel on this glittering evening.  Our understanding is that Obama has picked noted Benghazi expert Susan Rice to man the crisis desk should a frantic call come in from some embattled U.S. embassy somewhere around the world.

Personally I think a well placed nuclear bomb going off over that dinner crowd would pretty well solve most of this nation's problems.

I will bet you could get Joe "The Cowboy" Biden to ride the bomb down.Yee Hawwwww!

Absurdity is its' theme, such is the adulation shown all tyrants. "We the people" are being taken for a ride that is about to spiral out of control, pray for our Republic!

Craig, that probably wouldn't happen but I sure got a kick out of imagining it!

Prayers always, anon...a biased press and an apathetic citizenry; sure recipe for our national undoing.