Inequality And The Power of Overwhelming "Whiteness" 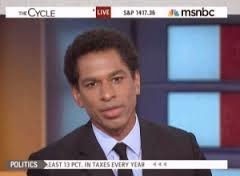 It would seem that liberals these days, so impoverished of morals or principles, are grasping at the most ridiculous "straws" to somehow justify the religion of liberalism.  We've seen it with their "faux war on women", their "inequality" whines that despairs of those who achieve any degree of financial success, their totally ignoring the fact that fully half of America is now on the public dole...and even Obama's latest labeling Obamacare subsidies as an "income redistribution tax."

The latest silliness came from, where else, MSNBC, the flagship carrier for the Obama regime and his liberal "army of the entitled."  Touré Neblet, hosts of "The Cycle", who likes to go by first name only, a la Prince, or Madonna, came out and said this weekend that the Jewish survivors of the Holocaust did so because of their "overpowering Whiteness".

My theory on liberalism is beginning to be set in concrete these days.  I can only assume that liberals, lacking the support of "the adults in the room", simply must cater to weak, morally corrupt, nonproductive tit-suckers that rely on big government for their largesse and privilege.  And, fortunately for them the growing numbers of those satisfied to feed off the life blood of others has reached sufficient proportion to keep liberal politicians in charge of the system for the foreseeable future.

Touré and Sharpton and Waters and  Jessie Jackson and Obama have achieved their political success by maintaining the fictional notion that Blacks and Hispanics have not had the same opportunities as "Whitey", and they pray that citizens will never look hard at the numbers and find out the truth. 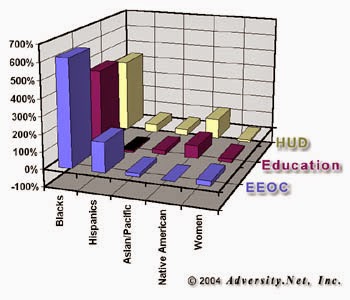 The truth is since the Civil Rights Bills of 1964 Whites have had little opportunity to compete against the government mandated racial quotas, whether it be in the realm of equal opportunity, housing or education.  As the chart above shows, Blacks have a 500% advantage over Whites when competing in the federal work place.  Blacks also win big on educational scholarships and grants; a 4 to 1 advantage over Whites.  The same is overwhelmingly true for gaining access to free housing or low costs housing loans.  And perhaps women might want to take a close look at that chart above;  Blacks, unless you are a Black female, crowd out any chance that White women might aspire to in either education, work, or achieving home ownership.

A note of warning to Blacks; the chart above was done in 2004.  The latest 2013 charts show that liberal mandates have found themselves a new "dependent darling".  They are the Hispanics, especially illegal Hispanics , who are quickly approaching "preference parity" with Blacks.  The latest numbers show Hispanics running neck and neck with Blacks as they compete for in-state tuition, job preference or even Section 8 housing as Hispanics gain an immediate foothold on subsidized housing, free school breakfast and lunches, child welfare, WIC,  and Food Stamps as soon as they drop that first anchor baby.   Already Hispanics enjoy a 2 to 1 advantage for government employment hiring over Blacks and an even more impressive advantage over Whites, including White women.

So Sharpton and Jackson and Waters and Obama hope to keep the rest of America drunk on liberal Kool Aid, while keeping Blacks and Hispanics busy on the liberal plantation...and never looking at the hard numbers that tell the real truth about inequality in America.

As for Touré, he's busy these days trying to explain away his "overpowering Whiteness" comments to the families of 7 million Jews who didn't survive the holocaust.

Oh, did I mention that, while Touré was attending Emory University on taxpayer funded Pell grants and minority scholarships, he founded a Black newspaper called "The Fire Next Time", a Black Supremicist, anti-semitic rag that denigrated all non-Black human achievement?  Did I mention that Touré conspired to stage a hate crime hoax to promote ethnic hate and, when found out, justified the hoax as a means to advance the Black movement?

Perfect fit for MSNBC, huh?  That's why, when the 2nd Civil War begins, 30 Rockefeller Center has got to be the first edifice to be taken out, like the Gomorrah it is.  Then Whites may no longer be persecuted for the color of their skin.

When I worked for a nation wide rental company as an admin assistant, I would watch as Managers would toss out any resumes that were from white people. Bonuses were based on diversity. Hated it.

Jilly, that's sad but we live in an upside down world these days...at least in this country.

Thanks for offering our readers your personal experience.