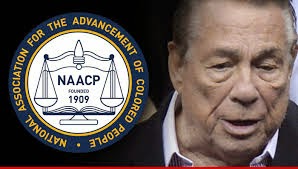 I have little sympathy for a rich old goat of a billionaire that forsakes his wife for little eye candy bimbos who would stoop to sleep with an 82 year old man for the furs and the diamonds.  And I have even less sympathy for billionaire slum lords who get rich on Section 8 housing vouchers and illegal Mexicans.

Having said that, there is so much more to say about the Donald Sterling fiasco and what the ramifications of this incident might have on your own personal liberties.

First of all, unless you have gone to TMZ Sports and listened to the entire 9:27 recording you would never be able to put this man's words in perspective.  I was aghast when I first read the ugly headlines, then I went to the TMZ site and listened for myself.  From the first, you could see that this little opportunistic bitch was egging Sterling's 82 year old addled brain to spew out "the uglies", "ugglies" that when you listen to them are not quite as ugly as the headlines would have you believe.  You hear Sterling say such things as "I like Black people", "I like minorities"..".but I don't like you hanging promoting yourself with them, showing up on Instagram and Facebook and the like".  In other words, this 82 year old man was jealous.  But each time Sterling steered the focus of his ire toward the woman's "media whoredom" she dredges up his anger and steers him into making racist remarks , knowing full well she's recording him and preparing to cash in.

Also keep in mind that Sterling is seen in unending shots as he's seated in the Staples Center, with Blacks and minorities all around him.  He's not cringing in a single pic.  And also keep in mind that all of Sterling's comments were made in the privacy of his home, without the knowledge that he was being recorded.  How many of you have said things that you would never want the public to hear?

Oh, but the 80% Black NBA were aghast at this!  The man was the lowest form of human for having made these comments, this despite the fact that, for the past twenty years, Blacks have been calling themselves "nigger" in the locker room and not a single stink was made of it until this past year when the NBA ordered Blacks to cease and desist.  Enough Black players were angered enough by the NBA decision that they threatened to take the NBA to court to allow them to keep spewing "nigger" to their bro's.  And since the NBA does not control the speech of RAP artists and ghetto dwellers, the "nigger term" is used a million times a day throughout America.

And you know what?  In that long 9 minute recording you don't hear Sterling use the word "nigger" even once!  But Blacks are shocked!  shocked I tell you! that Sterling doesn't like his 27 year old squeeze getting laid by a Black.

And who among the Black community was offended by Donald Sterling, ghetto slum lord, before this incident?  Apparently not many.  The NAACP had already awarded Sterling a "Citizen of the Year" award a few years ago and were already polishing the water glasses to present him another at their Los Angles NAACP Dinner scheduled for 15 May!  You see, as long as Sterling was forking out $25 million a year to Chris Paul, et al, and as long as he was giving out free Clipper tickets to the boys in the hood, everything was great!

Sadly, what this whole ugly mess has proven is that Blacks can summon up a whole hell of a lot of indignation and anger in a heartbeat.  They can mime open mouth shock that a racist lives among them.  And they can exploit the sad mad utterings of an old addled man and turn it into the pitiful robes of "victimhood" and ride on a train of self pity and racism for years!

And, perhaps more sad, for all of us, is that we now see the massive and oppressive "majority" that can destroy you, crush the very life out of you, for something you might have said in private and meant for two...and not 200 million.  And be forewarned; soon the drone police, under orders from the "thought police", can hover over your house and pick up and record what you said when watching a news show where a Black thug raped and murdered a 90 year old war widow.....or perhaps your vocal reaction to a 100 Black thug "mob rob" of a Baltimore 7-11 store.

Watch out people!  You are losing your liberties at a frightening pace, and political correctness has robbed you of an honest thought for years now....and now you can see how easily you can be crucified on the cross of political correctness should you ever stray from the "PC straight and narrow".  If they can squash a billionaire like a bug in three days imagine how quickly they could deal with you!

Now if you haven't heard the tape, and you have an ear for objective listening, I dare you to listen to the entire 9:27 minutes of tape.  See if you too can see how the gal draws him into saying what he doesn't want to say...see how his motivation is jealousy and not a blatant racist rant on Blacks, no matter how despicable the dude might be in other phases of his life.

Okay, my arms are out, go ahead and hoist me up on that cross!  But don't dare tell me that the fault is  all with a jealous and bitter old slum lord.

POST SCRIPT:  Basketball great Kareem Abdul Jabar just came out Friday in an editorial in Time Magazine that said the same thing I did...glad that Sterling is out but thinks the girl ought to go to prison for illegal taping and jumping all over the media for whooping up and cheering for an attack on someone's personal liberties.
Posted by A Modest Scribler at 2:00 AM

Jerry, my friend, go back to sleep, and when you are well rested, read this again. I disagree that every one is a whore because I've made hundreds of ethical choices in my life that would have proven to be beneficial but highly immoral.

But whoredom is not the point of this blog so I won't belabor the argument.

Thank you for posting the link to the recoding. I have avoided listening to the recording since it is a private conversation and a conversation between two morally bankrupt people. After reading your column I decided that perhaps I should listen in. All I can say is: Wow! What a nasty piece of work this woman is!! He kept trying to end the conversation and she just kept pushing the issue and she kept bringing up race. He never once said anything truly offensive. The manufactured outrage is way over the top. Seems like people only get offended when they want to be and not when they should be. Sad. Very,very sad.

Anon, that was my point...the media blew an ugly thing to mythic proportions...but when you listen you see how it happened in context; an addled old man, a manipulative bitch who was clearly setting him up, as only a young piece of ass can do.

I don't feel sorry for a nasty and greedy old guy...but I feel sorry for us because of what it says about how quickly any of us can be destroyed by a media and a race of "victims" who will make far more of something than it actually was.

It should scare everyone.

You could tell right from the beginning of this where it was going to go, and as usual, the whore will probably become a celebrity now, get rich from interviews, and possibly be given her own reality TV show so all the Kardashian fan types can obsess over her. When I try to imagine the damage that media will have done after a few more decades it makes me glad I won't be around. I don't think humans stand much of a chance.

Anon, like all the other stuff that comes out of the media, the vast majority of Americans will get the media's take on the Sterling incident...the vast majority will never listen to the tape to assess context.

Public apathy is why Obama is still in office and why Washington D.C. is a corrupt as it has ever been.

I too am happy I won't be around to see what comes from all this madness.

This whole thing smells of corruption (aka the NBA). I have no real comment on Sterling, but after years of taking part in the corruption that is the NBA and having to be around ungrateful gangsters day in and day out probably took a toll on him. I'm guessing there's an underlying cause for why this came out to the public to have Sterling lynch mobbed by the couch activists of this world.

I'm guessing this punishment for having the wrong LA team in the playoffs or one of Stern's buddies wants to take the Clippers and move them to another city. All professional sports are getting tough to watch as it makes you wonder how many of these games are real and not fixed. Maybe I'm too skeptical about pro sports, but I'll stick to HS and college games since the kids actually play for pride.

I have noticed that the political correctness police(AKA Mainstream media) has been throwing gasoline on a fire they started by reporting just a snippit of what was a private conversation in a private home by a miserable excuse of a woman, and sold to the TMZ site for their benefit. How many of these "people" would like to have their own words exposed like this?

I guess the possibility of some hurt feelings trump the First Amendment. Sickening!

It will be interesting if Sterling wins his sure to come court hearings... Stay tuned!!

Steve, it will be interesting to see if this political correctness prevails in the courts....I find it hard to believe that the courts would uphold a forced sale of the franchise by the NBA. Gonna be messy.