"The Case Of The Missing Lisp" 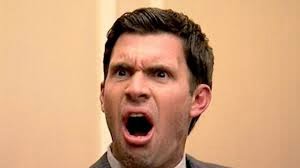 This morning, as I was working my way through the internet newspapers I read each morning, I had CNBC's Squawk Box streaming in the background.  Their guest this morning was a fellow named Jeff Lewis and the hosts were discussing business with him.  I wasn't paying a lot of attention but Mr. Lewis' pronounced lisp was kinda getting my attention and I glanced over at the boob tube for a moment to see who the source of this was.

Well, forgive me, but the I quickly opened up another window on my I Mac and googled Jeff Lewis.  My motivation?  To see if the dude was gay...cause he sure as hell sounded like it.  And yes, he's gay.
Now, you all know by now that, while I'm not much in favor of gay marriage (though a good civil union to protect legal rights is fine with me) but otherwise, if they would just weren't so "in your face"  these days, I have no big problem with gays.

Still...what caught my attention this morning with Mr. Lewis is that I had just watched James B. Stewart on this same finance and investment show last week.  And Mr. Stewart was lisping like no one I had ever seen before...and he was mincing and squirming in his chair like he just couldn't wait for a little session of "slap and tickle" as soon as he left the guest chair.  What was surprising to me was that I have seen James B. Stewart no less than thirty times on TV...doling out investment advice and offering his thoughts on how the economy is unfolding....and in all the previous 20 years I had not seen/heard Mr. Stewart lisp a single time.  So, yes, I googled 'James B. Stewart and learned that he's gay.  Does that lisping bother me?  Yeah, I guess it does...and I'm surely wrong...and definitely politically incorrect for thinking so.

So, I guess I've come up with a new theory about gays these days....not only have thousands of them come out of the closet...but they now feel liberated enough to lisp like little girls.  Okay, I know that's cruel, but I can't help it.  I just can't stretch my sense of tolerance sufficiently to accept people who spoke completely normally in earlier times, who are now mincing and lisping like little girls.

Ellen DeGeneres is gay...and I think she's sweet and charming.  She does not call attention to her sexual preferences and speaks like normal folks.  Rock Hudson was gay, and though I was shocked to hear it, I didn't know so it didn't bother me a bit.  Neil Patrick Harris is gay and I hear not a single lisp.  Dozens of public figures; gay..and no lisp.

So what the hell is going on here?  Am I simply dense?  Is there something going on here with gays that I don't understand?  Is the art of lisping confined to those who are assuming the more feminine "wife" role in a gay relationship?  Is lisping the non-verbal cue to let a potential bed mate know that they are the "wife" candidate?

I am frankly dumbfounded by this new phenomenon.  And I apologize in advance for my neanderthal reaction to all this newly discovered lisping....but to be honest it just bugs the shit out of me to see grown men talking like a four year old with a speech impediment.

Nobody wants to touch this one Scribe. I will, I agree with your assessment. I can careless what two (or multiple) knowingly, consenting adults do legally behind closed doors. With that being said, I'm tired of the "in your face" attitude they are showing, and don't get me started on the "kiss" this last weekend. Jeez, what's this world coming to!

Nobody wants to touch this one Scribe. I will, I agree with your assessment. I can careless what two (or multiple) knowingly, consenting adults do legally behind closed doors. With that being said, I'm tired of the "in your face" attitude they are showing, and don't get me started on the "kiss" this last weekend. Jeez, what's this world coming to!

Yeah, I know, Brian. But I I don't write what I honestly feel this blog wouldn't mean much.

I've met plenty of gay people that you would never expect until they told you - never bothered me. However, why does it make me grind my teeth when I meet one that has to act so flamboyant?

Also maybe I missed this in one of your previous blogs posts, but I'm glad to see that you were for civil unions for legal reasons. I still don't understand why they needed full blown marriage to make their love "official." I'm waiting for the next judge in California to claim that marriage to an animal is now legal...(hope not).

Have a great weekend everyone!

Thanks, Trevor..exactly my sentiments. Heterosexuals do not normally flaunt their 'straightness' nor talk about their sex life...at least those with a modicum of good taste.

Thanks for visiting and commenting my friend.

It is illegal in Kali to pronounce your pride in being a heterosexual, I never paid it any attention as I thought it was the normal way humans are. I still believe that's a fact and homo is the deviation from the norm. It is not a genetic oddity they are born with. I enjoyed the column to the "e"nth degree I'll tell ya.
We were given four tickets in some pricey seating ($100+ per) to the GAY Giants game. Now if that ain't a play on words there. Sorry, they can have them back. I will not attend a night where gays come to the ball game to celebrate their perverse lifestyle. What a sad day. I think of going to the game in the day of Jimmy Stewart when men were men and talked with pride in being heterosexual with a voice that changed with puberty to one that no longer sounds like a man wishing he was some kind of perverse model of a six year old girl. No offense girls. This is truly not a great time to be alive in america. Celebrate Normal please

Ken, you are officially a neanderthal, like me. We must be because we just don't "get it".