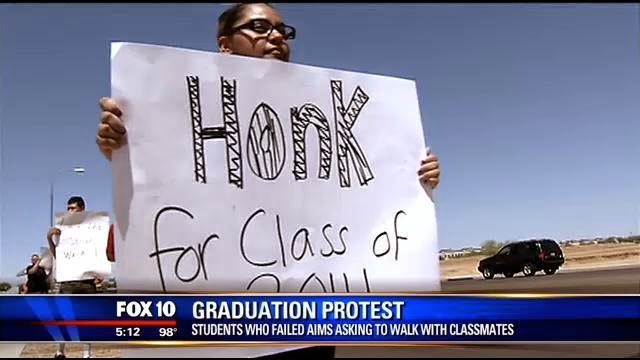 My dear readers...I was all set to give you a cheery, homey blog today; one that might generate a smile or a chuckle or two.  I thought you deserved it after several days of inflicting savagery on liberal silliness.

Then I made the mistake of turning on the evening news last night.  Sadly, here's what I found:

A 22 year old woman in Quincy, Massachusetts called in a bomb threat to her university's graduation ceremony.  Her motive?  She was not getting to graduate and hadn't told her parents, so thought it a good idea to phone in a bomb threat and get the graduation ceremony cancelled, lest her parents see that she's missing up there on the dais when they are handing out diplomas.

A Yale University professor, the honored speaker at a small Pennsylvania college's graduation ceremony castigated the graduates for having fostered a riot in protest of the previously scheduled speaker, the President of Berkley, who was forced to break up an Occupy protest at UC when it turned violent.  The Yale professor admonished the graduates for being of small mind and intolerant of opposing points of view.  This comes on the heels of a plethora of similar protests, all driven by liberals mind you, across this nation.

I found it a bit ironic that a Yale Civics and Sociology professor, one who surely helped to indoctrinate our nation's youth in the liberal philosophy is himself shocked at how effective he and his fellow academics have succeeded in brainwashing....to the extent that their liberal views have already hardened..and to the extent that tolerance of opposing points of view is no longer allowed.

Finally, we have 24 students, all Hispanic, at Sierra Linda High School in Tolleson, Arizona, who are taking to the streets to protest that their high school will not allow them to walk in, and participate in their school's graduation ceremony.  It seems all 24 failed to pass the states highly lenient standardized AIMS test, failing both English and Math.  "No matter!", they should let us wear our caps and gowns and be recognized just as the graduates will be honored!

And really, who can blame them?  These Hispanic kids have watched their parents march in the cities of America and have been successful in raising enough hell to keep them from being deported....so, what the hell, let's stand out in front of the school and see if we can't gin up enough public support to get us up there with our caps and gowns with those who took the time to study, to do homework, to listen when the teacher was teaching the lessons!  What's the big deal?

And really, what is the big deal?  In an age where every kid gets a trophy for a last place finish in soccer, where blue ribbons are given out for substandard performance, it's a bit of a shock when the real world intrudes on your charmed life, right?

And when you've been taught that, if you throw a loud enough tantrum, you'll get your way, why not throw that same tantrum when the guest speaker at your graduation ceremony is someone who doesn't agree with you!

And hey, if you've been able to bamboozle your parents into forking out $40,000 a year for tuition...and you use the academic venue to party hearty, you don't want to face the folks when they found out their $160,000 dollars went right down the urinal and the other end of a bong, right?  So, what the hell, call in a bomb threat, ruin the occasion for everybody...but for god's sake don't let mommy and daddy know you couldn't hack that 9 semester hour class load!

I'm sorry folks....look for that cheery and homey blog essay on a less newsworthy day...these libtards just keep feeding me red meat and I just can't pass it up.
Posted by A Modest Scribler at 1:30 AM

Oh no! That's two in one week where I agree 100%? Can one of us be wrong? I am welding today, got an "art show" this weekend, so can't talk long! Quick question! Have you done a blog about the general disrespect in this country? to others, to teachers, to lowly workers, to the earth? I have never seen so much trash on the streets!
Have a great day!

Hi Jerry...it's very possible that we can both be "right" today. Yes, I have touched on civility in a number of blogs, have one in draft now that touches on some personal experiences.

As to our disrespect for the earth, I agree and offer this: I've written often of hour hundreds of green vested senior volunteers who file out into the neighborhoods each morning to clean up the mess that transiting drivers throw on to our streets. Our streets here in Sun City are pristine thanks to these 70 year olds who go out and pick it up. And I think those green vests, worn by old people, actually serve as a deterrent to others who might have been contemplating throwing their Burger King bag out the window.

We have another group of volunteers called The Sunshine Gang who go around cleaning up the yards of folks too old to do yard work and too poor to hire it done. These folks go out every day, find a yard in disrepair, then pull weeds and trim bushes and trees and cart of the refuse.

i don't know of any other community that does this to this extent.

My hats off to the older folks who pick up the trash from the trash who deposit it! When I was a kid I remember "Do Not Litter" all over the place and promises of a $75 fine. I no longer even see the signs. Personally, I would shoot these people who trash our lakes and ocean beaches! (seriously!). You could get a truck load of trash from the area around the nearby High School. We have LOST our pride and seem to enjoy destroying our own nest.

Well Jerry, when that 2nd Civil War starts we'll put you in charge of shooting the litter bugs, kay?

Ha! It will be a long wait but I might shoot a few for practice!