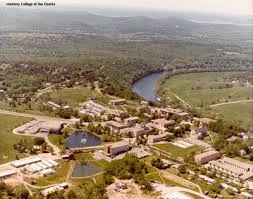 In 1901 a young minister was out squirrel hunting in the hills of the Ozarks of Missouri.  During the hunt he ran into a young boy, well spoken and seemingly hungry for knowledge.  When the minister encouraged the boy to go on to high school the young lad told him that he would not be able to because the nearest high school was 40 miles away and his parents were too poor to send him there.

The young minister, James Forsyth, was from St. Louis and had never thought about what a challenge it was for young folks from the country to get a decent education.  He went back home and chewed on the problem awhile and he couldn't get that intelligent young man out of his mind.

Lacking the funds himself, Forsyth approached a couple of rich brothers who had started making snack crackers under the company banner "Nabisco".  He cajoled the brothers into donating the land and kicking in enough to build a 75 x 50 foot school house for school hungry country kids who hoped to learn more, to quench their thirst for knowledge.

In 1907 that little school house opened its doors and, from the very first, they required their students to work in the school to limit expenses.  They collected no fees from the families and needed every student to chip in and make a working contribution to the school.

180 kids formed the first class and every one of them learned the value of an education because they were taking a stake in it through their work.  36 of the kids boarded at the school because they lived too far away to commute.

That first school burned down in 1915 but school administrators were not ready to give up on the school.  They moved up the White River to a 16 acre site near Point Lookout, Missouri.  But they still had the challenge of building a new school.  One of the school leaders remembered that, when attending the St. Louis World's Fair in 1904, he was impressed by a building constructed to feature fishing aficionados.  The school leaders wangled the Missouri Fishing Association to donate the building and move it to the new school site.  While the campus was later expanded, the central hall was that old Fishing Club building.

Thanks to the dedication of school leaders, and the hard work put in by the students, that school continued to flourish and prosper.  In 1934, seeing a need for more funds to support a growing student body, and because they still did not charge tuition, the school went into the fruitcake business.  In 1934 the "Fruitcake And Jelly Kitchen" opened for business and supplied badly needed funds for teacher salaries and books and maintenance materials.

In the 1950's, as more and more public schools were made available to the country populace, the school became a community college...still maintaining the requirement that students pay for their tuition and books by working on campus. The little private college continued to flourish so that in 1965 it became a full fledged university and remained tuition free.  Their agricultural majors run the dairy and cattle operations that supply the milk stations and the hamburgers on the grill being served by the Culinary majors in the college cafeteria.  The Librarian majors run the library, the Accounting majors help keep the books and the Pre-Med students work in the student clinics.

In 1973, a Wall Street Journal writer, enamored by the philosophy of "the little university that could" nicknamed the school "Hard Knocks U" and the students liked the name so much they made it their school motto.

Today that school, the College of The Ozarks, turns out 1500 graduates a year.  The National Collegiate Association recently ranked the college 29th of the best colleges in the nation.  Both the U.S. News And World Report and Money Magazine rate them as the finest school in the nation.  Their students have won national NAIA baseball and basketball championships and they turn out graduates in over 50 academic disciplines including pre-law and pre-med.

The students are required to work 15 hours per week, and two 40 hour work weeks sometime during breaks in the academic year.  If the student wants free room and board they have a summer work program to fund that as well.  And when these young people graduate they don't owe a dime in student debt.

And, oh yes:  they are still turning out jelly and fruitcakes in the 90 work stations of the Jelly and Fruitcake Kitchen.  They turn out 100 fruitcakes a day, then wander over to sweep out the college cafeteria, vacuum the library or mow the lawn on their now thousand acre campus. 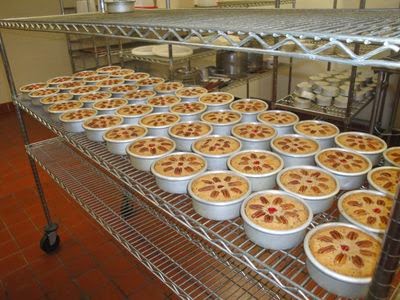 And don't bother sending Hard Knock U a couple of bucks.  Americans so admire this "little college that could" they have endowed the university with $277 million dollars so that the concept of dedication and hard work may always be something we can admire. 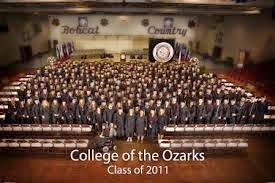 By George you've done it again! Right out of the park over the wall home run. What a great story. The news and human interest stories I hear are all a downer these days. This however is not one of those. Up lifting, inspiring and offering a glimmer of hope in a now failing nation. That is truly a great school. Why can't those same values be instilled here in California?? Because we offer everything for free, and a student loan to make you think free is really free or you can pay later or not....love your story today, thanks

Thanks so much, Ken...means a lot coming from one of my oldest readers. Maybe a sprout from that little school that could will grow and blossom further.