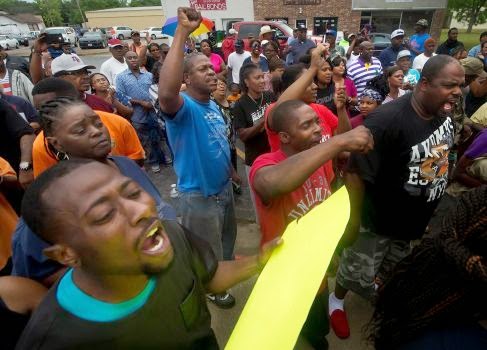 For two days I had been reading the headlines....but didn't click on the story.  Then today, I finally read that a police officer down in Hearne, Texas had been fired by the city council for killing a 93 year old Black woman.  Had I stopped there I would have thought "what a brute!"  Then I read further and learned that this 93 year old lady was brandishing a handgun, that when the officer arrived on the scene, in response to a 911 call by the family, and asked her to drop the gun, she refused and was pointing the weapon at the officer.  According to the woman's nephew, the elderly lady fired two shots in response to the order to drop the weapon.  The officer then shot her three times and she died from her injuries.

And for that he's been fired.  Well, I knew this one had to be motivated by either political correctness or that age old black victimization thing.  So, I googled "Hearne, Texas" and Wikipedia told me all I needed to know; the town is 45% Black, more than three times the national average, with Whites the minority.

Yep, the old lady was fully justified to terrorize her family with a gun.  She was fully justified in brandishing a handgun and threatening to shoot family members.  And no problem with her shooting at a Police Officer because, after all she's Black....and we all know Blacks are always justified in what they do...because they are victims....after all, this old lady could have been Barack Obama's grandmother.

What we have here is simply one step further into our descent from civilized society, from personal responsibility, from the rule of law and FOR condoning any form of civil disobedience if the perpetrator is either Hispanic or Black, or Gay.

I found it sad that, as soon as I read the official report, and read that the city council of Hearne, Texas had voted 6-0 to fire a law enforcement officer for doing his job, I knew before I even looked up the demographics of the place what I'd find.

While reading about Hearne, Texas I learned that the place has been ground zero for drug deals and a crime rate totally out of whack.  Now, it can only get worse....when the next time a 911 call comes in I suspect the officers will be sitting in a donut shop, ignore the call, and ask for another chocolate eclair and a refill on the coffee....why jeopardize your job by actually enforcing the law.

Maybe the city council will regret this insane firing of the officer when the police decide to do their job, but slowly. No speeding to an active crime scene, don't chase the perps, or just quit and go elsewhere and join the police department in another town. Then policing of this town would be done by the county sheriff's department whom they can't fire!

If they want crime control, they could just call Al Sharpton and Jessie Jackson. Oh.. Wait.. They only come if its white on black crime!!

Of course this might finally get the citizens to act and recall the entire city council and put in people with common sense. Or council members themselves become victims of the criminals they seem to protect

Steve, the cop will get hired somewhere where keeping the peace is still valued. As to the Hearne, Texas council, or it's Black majority chaining its mind, don't think so...they'll simply whine about the crime rate.

The audacity of anyone calling anyone else a racist just amazes me, how can it be racism, it should more accurately be called "the obvious". The conclusions you came to without any further investigation into the demographics is the same conclusion, I would venture to guess, that 95% of any honest non black living in the USA more than a year or two would come to. Yet coming to the most obvious conclusion as this immediately would label the non black a racist. It just drives me nuts. It also drives me nuts that it made sense to the residents of Hearne to fire the cop. So I would suggest along with the border fence, a fence be constructed around those urban areas where blacks want to live this weird lifestyle. I further suggest that any and all armament they want to purchase be provided and let nature take its course. I am so sick of hearing these stories that what I'm suggesting actually makes sense to me. Now that there is "Sad, Damned Sad"

I just saw a video showing two high school students, male, brawling in their classroom. They were both fairly large and had just tore up the entire classroom. Nobody was able to do anything to stop it, the teacher was quite small from what I could see. Well the teacher seeing that the boy losing the fight was being beaten quite badly and the other boy was not about to stop pummeling him. The teacher, seeing no relief in sight grabbed a broom and hit the kid across his back two or three times screaming at him to stop.

The fight was stopped thanks to the teacher's intervention. Now we go to the reporter, castigating the teacher's actions and asking for her immediate dismissal. They showed the boys mother lifting her son's shirt and pointing to the areas struck by the teacher. I couldn't see them at all. The mother speaking venomously about the teacher's reaction. It's all just so disgusting. We are so shocked when people behave in what is perceived as racist but really is just common sense and an instinctive survival reaction.

Ken, re your first comment; you're right...it's not racist if it's true.

On your second comment, yes, I saw that video too and, like the cop, I knew the teacher was going to get in trouble for doing the right thing...because the world is upside down now.