Jobs I Failed Miserably At 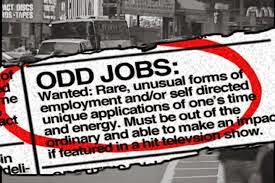 About once or twice a week I get a hankering to go back to work.  I sometimes miss the management challenges and the real satisfaction one gets when you see your efforts come together and you achieve remarkable results.  Then I remember the commute, as short as a few miles, or as long as 10,000 miles as when I worked for a decade in Saudi Arabia.

I guess what cools my ardor is remembering my many failures.  As a teen I remember getting tired of picking grapes, laying raisin trays, swamping grapes and the like.  It was hard work, done in the heat of summer, and five or six bucks earned at the end of the day just didn't seem enough.

One summer I vowed I would escape the grape patch and move up to a higher calling.  I saw an ad for work in an ice plant.  The job was something like an "ice stevedore" as you stayed up on the second floor of an ice plant, then using huge ice prongs, you would man handle a hundred pound block of ice, pull it over to a down ramp and send it down to the main floor to be picked up and loaded on a freight truck.  When I first read the ad it sounded so good; I would at last escape the dirt and filth and heat from the grape vineyards and just chill out in the middle of summer in that ice plant.  I think I lasted a week.  The damn place was so cold it always took an hour after work to thaw out and get my blood circulating again.  So I walked.

Now unemployed, I went back to visit the good old job classifieds and found another gem.  The hours were great!  You reported to work at midnight, was off by 4am, and got paid $1.50 an hour, which was big money in the mid-60's!  Had something to do with a chicken farm....sounded okay to me so I went down and signed up.

They told me to report up at the feed store at 11:30 that night so I had an early supper and grabbed a few hours sleep before heading out to work.  When I arrived at the feed store there were a couple of dozen Mexicans hanging around a flat bed truck laden with chicken cages.  I was the only white boy there and didn't understand a word of Spanish so I was pretty well lost.  Soon we were given the signal to load up on the truck by the Mexican foreman and we scurried into spaces between the chicken cages and off we went.  After about an hour of bouncing around on that old flat bed, the truck finally turned off onto a dirt road and we ended up on a huge chicken farm.  Well, everyone jumped off the truck, grabbed a chicken cage and headed into a long low building.  I grabbed a cage and followed along, still not knowing what I was supposed to do.  Finally, one young Mexican man took the time to try and explain the work.  He held out his hands and splayed his fingers wide and bent over and began aping the act of plucking something up with those splayed fingers, then pushing same into the cages.  I finally figured out what I was supposed to do and stumbled through the dark as if we were all on a clandestine mission.  I found out later that the chicken catching had to be done in the dark so as not to rile the chickens and get them scurrying, and having to chase them down to cage them.

So I enter the building and the first sensation I feel is my new Keds sinking down into a good three or four inches of foul smelling chicken shit.  By this time I'm sweating like a baboon and I'm doing my best to splay my fingers wide and catch chickens as ordered.  You were supposed to grab them by their feet, hold your capture upside down, then grab another one, then another, and when you've got a handful you begin pushing them into the cage.  I was terrible; I would grab a chicken by its feet and the damn fowl would try his damnedest to scratch me with his claws or crane his neck forward and peck at my hands.  I think I was able to cage about forty chickens in that four hours as the skilled Mexicans loaded dozens of crates in that same time.

When God finally answered my prayers and that miserable shift was over, I emerged from that chicken house, my best Levi's smeared with chicken shit, my Keds ruined and my ego even worse off.  As we climbed back on the truck to head home I had my head bowed low, ashamed that I had not done my fair share of chicken plucking.  To their credit not a single Mexican looked askance at my poor effort.  Indeed they were happy as clams as they sang mournful love songs in their native language all the way home.  Hell, who wouldn't be happy after having that miserable shift over with for the day!

When I got home that morning my mom took one look at me; my chicken shit splattered jeans and shoes and herded me back out to the garden hose outside.  When I came back in I just said "don't even  bother to ask" as I headed up the stairs to bed.

Fortunately that summer I was able to escape the grape patch and actually pulled in a nice haul picking beans.  My friend turned me on to a farmer who had lost his crew and he was not shy about shelling out good money to harvest his beans.  I made more that month that in any summer previous...enough to pay for my high school student body card, student fees....and a new pair of Levi's.

My string of failures didn't stop even after I entered the Air Force.  As my family grew, an enlisted man's pay was not enough to feed and clothe four kids.  So it was back to the good old reliable want ads.  I came across an ad that said La Salle Extension University was recruiting for a salesman to sell their correspondence courses.  And since I was so hyped myself on education in those days I jumped at the chance.  I was asked to go door to door and wangle my way into the house and convince the client to sign up for a correspondence course in Refrigeration Repair, or Accounting, or the wonderful fields of Forest Ranger or Law Enforcement Officer.  Folks, I failed miserably at selling education.  I wore out my fingers ringing doorbells and got nothing but cold hard glances and doors slammed in my face.  When I did get someone polite enough to listen to my spiel they were either like me; too broke too afford the courses, or they were an officer looking to get his Masters Degree in Engineering to enhance his promotion chances.  I lasted a month and sold nothing...finally turned in all my pretty university phamplets and went back to the want ads.

My next job was as a bouncer at Club 81, a topless bar in Grand Forks, North Dakota.  My job was to sit on a stool next to the door, check ID, charm the boisterous into quiet if it got too disruptive, escort them out if they refused, and discourage the customers from groping the breasts of this week's "topless divas" on the little stage in back.  The job was not as bad, or as dangerous as one might think; if I ran into someone I couldn't handle alone; some burly lumberjack from over Minnesota way,  a couple of the bar crew would assist me in throwing the guy out.  But even this job got old.  It was just that...well, have you ever had to watch female hips grinding and breasts bouncing for hour after hour, night after night?  Believe me, it gets old in a hurry.  Plus, the bar closed at 1AM and I never got home before 2AM, giving me four hours of sleep a night.  My bouncing job lasted a few months before I hung it up.....as I recall my wife help me make that decision when she found out a little more of just what kind of place I was working in.....

Fortunately, the jobs started getting better.  I stocked for Kraft Foods at night, in the base commissary for the unheard of salary of $5 bucks an hour, with all the expired cheese I could use, and after getting my degree, teaching a year during one of my Korea tours at Los Angeles City College overseas extension.  They paid well and I enjoyed the work immensely.

Not sure you're going to enjoy this blog today....you may as well know what prompted it.  I saw an ad for workers out at Hickman Farms over in Buckeye this morning.  They are building a new chicken farm out there.....(true story!)  ;)

My worst job was delivering Dominos Pizza.On my first and only night I got a flat tire and a speeding ticket.

Oh my, Craig...those two things must have cost you easily a week's pay. Hope you are doing better these days, pal.