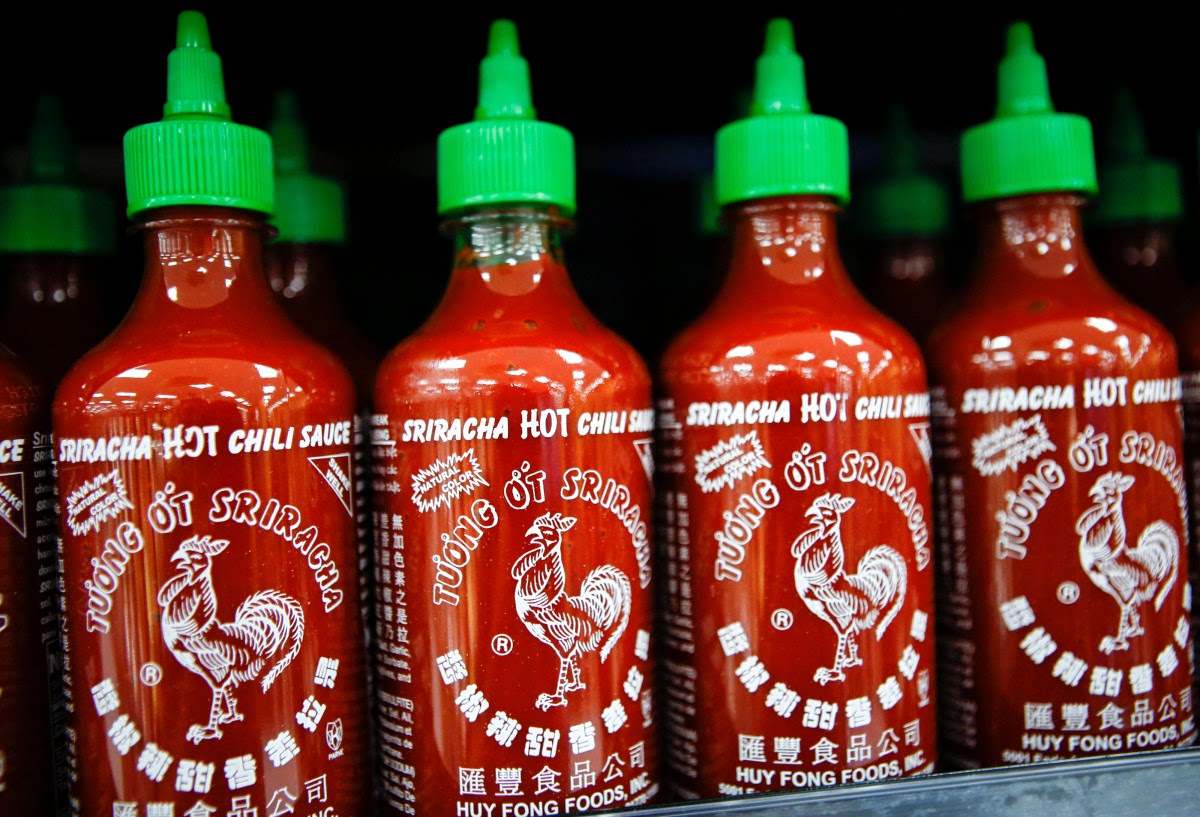 You've all seen them.  They are one of the condiments on your restaurant table...or it's the first thing when you want to give a nice spicy and savory kick to that pot of chili.  It's Sriachi sauce....in the red bottle with the rooster on the front and topped with a green tipped bottle top.

It was all started by David Tran, one of the Vietnamese boat people who escaped Vietnam and came to the United States when they still welcomed entrepreneurs.  Mr. Tran landed in Orange County, California, took a look around and tried to figure how he was going to make a living.  So he went into his kitchen and began cooking up batches of his family's favorite hot sauce recipe.  He found someone who would make the bottles for him and began peddling his sauce at Vietnamese restaurants.  The sauce caught on big and American restaurants started putting the Sriachi sauce on their condiment tray.  Folks put one squirt on their breakfast eggs, or their restaurant meatloaf and began demanding that their local grocer carry the product in their stores.  Soon orders became too big to fill from Tran's kitchen.

He opened up a 600,000 square foot Sriacha factory in Irwindale, California.  Irwindale, back when California still welcomed businessmen, kissed his feet and welcomed the local employment opportunities that Sriracha provided.  Years went by, then decades...and millions of bottles of Sriacha passed through those factory doors and onto the table of connoisseur and blue collar joe alike.  Bon Appetit names it one of their top ten all time favorite foods.

Then the aromatic scent of cooking chili peppers began to offend a tiny, tiny contingent of Irwindale, California.  24 complaints were registered with the California Air Quality Board..all coming from only four homes..one from the delicate-nosed son of an Irwindale councilman.  The Air Quality folks came out, assessed the situation and recommended that the Sriacha company install filters on their factory vents...and they did.

Still not good enough, cried the delicate noses from the four homes.  So the city council, led by the father of "sensitive nose" voted the company to be a public nuisance and demanded further technological filtering so as not to offend anyone's delicate sensibilities.  One of the long noses found a liberal judge and he ordered an injunction against Sriacha's production.

So someone down in a little town outside Dallas, Texas...a fan of that sweet spicy sauce, got a hold of Texas Governor Rick Perry.  He asked if the Sriacha company couldn't be put on Texas' Economic Relocation Program's list.  Perry says go for it!  So, the Texas folks prepare to saddle up and ride out to Smogville and present their case to Mr. Tran for a move out to Texas where folks still value hard work and a quality product...and where Texas noses are not nearly as delicate as California liberals.

Mr. Tran begins polling his employees as to whom would be willing to move to Texas.  So the word gets out that Sriacha might be still another big business preparing to flee the Golden State.  Two California congressmen begin wringing their hands, seeing the corporate tax base disappearing before their very eyes, and they descend on Mr. Tran and begin whining and begging him not to to leave for Texas.

Mr. Tran is now playing "Texas Hold Em"...and he's playing his cards tight to his vest.  He now has to decide whether he'll fight the manufacturing injunction in a California court beginning in November. Or will he simply pick up his patented chili manufacturing vats and truck them over to Dallas.

For now, Mr. Tran is playing it cool.  He's entertaining the idea of opening up a second plant over in Dallas..so that if he's further "peppered" with delicate California nose complaints, he can join the caravan of businesses who have fled from the Golden State .

Update:  Ten states have now entered the bidding to bring the Sriachi company to their environs!  Mr. Tran might have to flee one more dictatorship...but this time it won't be on a rickety boat...and he'll be welcomed with open arms and a bouquet of Jalapeno blossoms.  ;)

Guess the whiny little wusses in
KallyFornYuh are going to learn a new lesson about the result of biting off the hand that feeds them.

Anon, and they don't even realize it.

I agree anon And I think they should leave Kallyfornyuh!
Texas-Oklahoma- or anywhere. It doesn't matter.