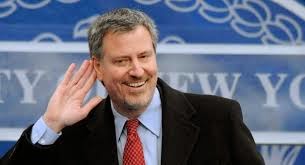 Oh, and that doesn't count the $8 billion "phantom" dollars that hizzoner claims he will save in municipal healthcare costs now that Obamacare is here.

What's the mayor plan to do with that money?  He's going to feed, educate and medicate every single kid in New York City...from birth to age 26...at least those the city doesn't fund to have aborted.  New York City was already funding K-12 school lunches and after school baby sitting services.  That's not enough, he says.  Now every woman who drops a kid within the city will have fully funded kiddy care and pre-kindergarten care.

In keeping with the mayor's crusade to fully fund socialized education within the city, last week the mayor gave NYC teachers a $4.5 billion dollar pay raise so that they can continue moving illiterate students promptly through the grades mill.

The mayor was hoping for, and budgeted for the same kind of pay raises for NYC police unions but this week they gave notice that $5 billion in pay raises ain't gonna hack it for New York's "finest"...I guess to include the 1100 police officers who claimed disability from 9/11 when they weren't even there.  Anyway, in exchange for the Mayor's directive to end the "stop and frisk" procedures for urban thugs, it's gonna cost him (or taxpayers) a hell of a lot more.

The New York Daily News is reporting de Blasio has far more headaches than just the police unions..the News is reporting that 150 NYC municipal unions have all expired this year and every one of them is expecting some serious green!

So why is de Blasio's city budget so huge?  Well, it's because de Blasio owes his voting block big time.  Accordingly, the mayor intends to build 80,000 new future ghettos (apartment units) that will provide housing for 200,000 of his "best friends".  The mayor vows to find space for them even if he has to confiscate private property to get these units built.  Liberal cost estimate (please double the number)...$42 billion dollars!

Millions, Billions....these numbers get thrown out so often now, they've lost their meaning to us.  Let me try to put into perspective what this monstrous liberal budget means:

In 1956 the entire federal budget was $74 billion dollars.  This budget funded every single federal department, sent federal support dollars to the 48 states...and oh, by the way, it included funding for the interstate highway system from coast to coast!  Oh, and President Eisenhower was able to pay down the national debt (less than $190 billion!!) when he returned a $4 billion dollar surplus that he chose not to waste.

Yes, things were tougher then...mothers and fathers who birthed babies were expected to raise and feed and shelter them.  Kindergarten was free but "pre-school" was parents reading Winnie The Pooh to their kids and giving them math cards for Christmas.  And 75% of 1956 families had both a mom and dad at home, unlike now where over 50% of American families are led by one parent...and almost always fall below the poverty rate because of recreational breeding.

So what does a Guinness World record holder win?  Do they give de Blasio a gift card for a six pack of Guinness?  Even if there are no prizes de Blasio has won the hearts, and the votes of some three million NYC tit suckers.

I spent my entire life working like a slave. The last several years were 100 hour weeks regularly to build my business. Every year, new fees, new taxes, gimmee, gimee, gimme. All over now. I closed my doors, sent everyone home, none of them have the benefits they had with me and a couple of them are union carpenters now. Your article touched me, I was born in 1956, this is progress?? I am also a catholic, well former catholic. I watched as the pope visits the UN and tells them to fight for redistribution of income for those who won't work for their own. He hates capitalism, what fills those coffers quickest pope? I am now told that China will be the world's leading economy before the end of this year now. I thought we had ten or twenty years? Will the pope find his lost USA funding by visiting China and demanding redistribution of their income. good luck! The US is over and in largest part due to the democrats and their great society. Good luck you fucking brats!

I have a better source for the Pope's funding and re-distribution of wealth, Ken. No one knows the value of all the great art owned the Catholic church, or all the properties, but I've read that it's in the hundreds of billions. Doesn't charity begin at home?

What will these morons who love to give hard earned taxpayer dollars do when more and more people and businesses leave NYC for greener pastures in tax friendly states? Mayor McHandout and NYC is on the road to bankruptcy by all these generous "gifts"... Guess he has fooled the people, who will have to bear the brunt when the city goes bust. There is no endless well of cash

I ran into this item while looking for something else, and it is still true today, especially with the current administration...
"Back in 1927, an American socialist, Norman Thomas, six times candidate for President on the Socialist Party ticket, said that the American people would never vote for socialism but he said under the name of liberalism the American people would adopt every fragment of the socialist program"
Sound familiar??.

The nine most terrifying words in the English language are, 'I'm from the government and I'm here to help.' Ronald Reagan