VA Indignation Not A "Chronic" Condition 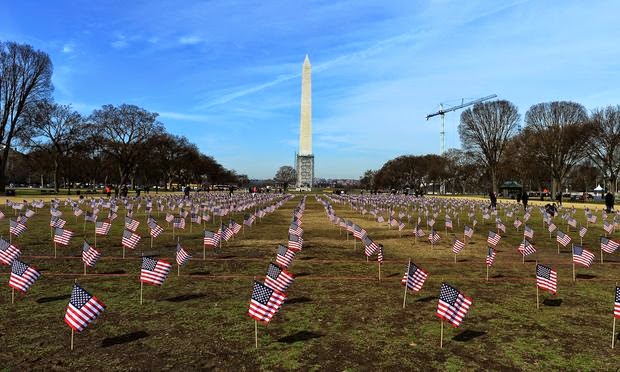 This will be the last of what I have to say about the VA Healthcare fiasco.  My advice is "chill out folks"...nothing is going to change about the abhorrent VA care given to so many veterans.  Oh yes, the media, finally beginning to sever ties with the Anointed One, after realizing they can't cover up every Fast and Furious, every Benghazi, every IRS scandal, every NSA intrusion, have begun to chew on the VA health care scandal....not so much because they care about vets, but because America cares about vets, the last standing institution remaining that maintains some sense of principle and values.

So what's going to happen?  How will this scenario play out?  How will the politicians choreograph their latest phony fits of indignation at how our vets have been neglected?  Well, let's first begin by saying this is not Obama's fault, (though through his secret disdain for the military, and his total ineptitude for managing anything, he's certainly made it far, far worse).  No, this can be blamed on Presidents of both parties, Congress on both sides of the aisle, and the only thing that will happen when the public furor dies down is that the politicians will simply shuffle the deck chairs and let this Titanic steam on.

Doubt me not, folks.  I was there when the VA told us vets that ten million cases of cancer for men in their thirties was not outside the norm...that Agent Orange had absolutely nothing to do with 30 something veterans dying from lung and kidney and bladder cancer and leukemia.  I saw too many of my comrades die before they even developed crow's feet....and it didn't take thirty years of medical research to prove Agent Orange was deadly toxic.

So, what the government did with the Agent Orange controversy was to throw a few million at the problem, finally admit Agent Orange was causative...and all the furor died down.  And today, thirty years later, vets are still having to prove they were around Agent Orange to get treatment, even though Agent Orange fell like rain over Vietnam for years and years.

Soon after the Agent Orange tragedy was swept from the headlines, our politicians took a hard look at the VA health care budget (the real cost of war) and decided we just could not afford to treat all the vets that they had run through the grinder in the last three wars.  So they began means testing VA health care...telling vets "well, we can't pay the freight on those wars so a lot of you folks are just going to have to pay the bill yourself...a little "above and beyond the call of duty kind of thing".
And there was no public outcry.   ( How many of you thought that EVERY veteran can be treated free at the VA?...hasn't been true for decades)

So the only reason there's a public outcry is because the media is carpet bombing this story....where was the indignation last year when the Pittsburgh VA was charged with gross negligence and held responsible for dozens of veterans deaths?  So don't fret folks...this little flare up will die, just as with all the other instances of "political desertion" when the vets need help the most.  Michelle and Jill Biden will make public address announcements about their "care for vets' campaign, Barack Obama will stage speeches about caring for out vets with a platoon of veterans in the background....but neither the concern nor the attention is "chronic"....just a temporary case of the "caring flu" that will pass and be forgotten.

The only thing "chronic" will be a few thousand new crosses going up in some VA cemetery...vets laid to rest before their time... cause too few people had time for them.

P.S.  The finest thing you could do for vets is this; it's too late to do anything about VA health care, but do this for vets and for yourselves...go out and vote these people out of office come next November.  Obamacare has got to go...because the government running your healthcare is just VA healthcare times a hundred fold.
Posted by A Modest Scribler at 2:00 AM

The last sentence of your second paragraph. That was the Truth, then you went on your stump speech.
It will be embarrassing if there really is a Judgement Day and we are facing God and our only defence will be, "I DIDN'T KNOW THAT"!
Most people don't really know any cost of a war, (or any cost of pollution or global warming!) because we never get the bill, are not allowed to see the returning caskets, glance away when we see the injured, denie when we see Homeless Veterans. Most of us are overwhelmed with our own problems and are satisfied with saying, "there but for the grace of God...". Or we don't give a shit?
You are right, it has been going on for decades, through Republican and Democratic Administrations. It seems that the Republicans won't fund the money and the Democrats spend it on drapes and decoration!
Young people are easy to lie to. They have dreams and courage.
We lie about taking care of them. We lie about sending them to war. and we lie to them and ourselves about paying for it (anything!)
We have not had any kind of "war tax" or sacrifice on the part of civilians since WWII. Frankly, the average American voter has no idea what is going on about anything.
They are more interested in voting for "American Idol" than in our National Elections. It is a problem not limited to any political party. It is a National Problem. Most people couldn't find Vietnam or Syria on a map let alone tell you what the issues are. Frankly, and Sadly, we just don't give a shit and politicians like that attitude. Yeah, we will say, "gee, I didn't know! How was I supposed to know?"
Not, Happy Memorial Day to you my friend, but a meaningful one and thank you for your service.

You are certainly right about the general apathy, and that is why nothing the government gets done, gets done very well...and that's why Obamacare must be repealed and replaced.

I hope you enjoy your Memorial Day weekend as well.