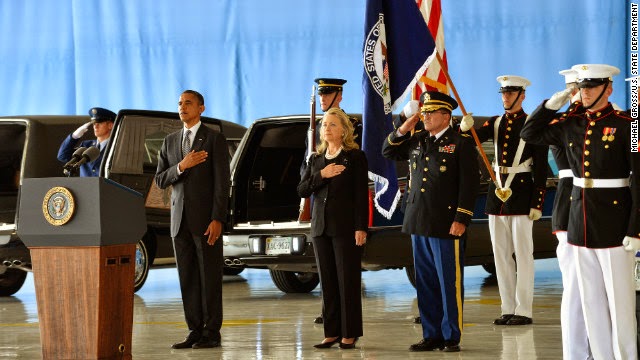 Well, the smoking gun came out this past week.  The internal White House and State Department emails that proved beyond all doubt that both Barack and Hillary knew that the Benghazi attack was an act of terrorism.   The official directives, the specific coaching of Susan Rice to go on the Sunday morning talk shows and lie through her teeth!  Now open your Webster's and look up "despicable" and you'll see this pic right next to the definition of the word.

God damn it people!  I want you to be mad!  I want you to "U-Tube" the shit out of that ceremony...listen to Killary blaming the attack on an anti-muslim film!  Listen to Barack tell his 10,000th lie!  Both of these freedom-hating, military hating cretins not only failed to answer that "3AM call"...they stood and lied to the American people right over the coffins of four brave Americans, including our Ambassador!  Just weeks away from a Presidential election Barack Hussein Obama just could not tolerate the real story getting out...then even his 115% voter turnout in Black districts might not have saved him!

These two people have made America the laughing stock of the world, a "weak sister" that the Muslims scorn and Putin laughs at!  They have demoralized our military, lowering combat standards, driving the word God and religion from the foxhole and replacing it with the "rainbow coalition" who shine only when they march in full uniform in gay pride parades!

I don't expect the "47 percenters" to get this, to put two and two together, to hark back to that coffin ceremony at Andrews, to hold a copy of those internal emails and compare them to what was said in that liberal dog and pony show at Andrews, but you should!  You've read this blog long enough, you've been given truths!  Now get up off your ass and email the White House and Harry Reid and the heads of the major news networks and voice your disgust at this blatant and despicable coverup of weak kneed, lying liberals who deserve a criminal trial, not the leadership of these United States!

Finally, listen to the Congressional testimony of those "retired" generals, forced out because they couldn't stand to see the White House and the State Department do nothing to rescue these people.  Get to writing those emails!

I'll be damned! I would have thought this one would have drawn a hail of comment.

As Hillary said, "what difference does it make?" That is what all the "live" people who voted for Obama are saying...and all the minions. Don't forget the kool-aid drinkers who have the deer-in-the-headlights look, saying "Whaaaat....?", before they go back to their next gulp.

I'm thinking the more the real truth (not the manufactured truth) comes out, the more the people will finally get fed up enough there will be real change. Wait for the Republicans take the House with even more seats, then on to the Senate to get rid of Reid and other libs, putting Owebama's agenda into doubt and failure.

More and more are being disillusioned by these thugs in nice suits and with the election looming have to be worried.