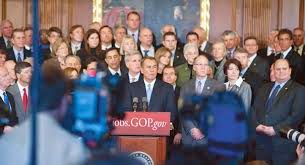 Your party thinks it's sitting in the catbird's seat for this coming November's elections.  You seem to think the Obamacare fiasco assures you control of both the House and Senate.  Well, it seems to me a lot of you thought you had a Presidential win back in October of 2012...and you were left stupefied with your collective mouths agape.

Let that be your first lesson.  Let's look at Obamacare:

Yes, the recent polls show 64% oppose Obamacare as is...and 88% want it repealed..or "changed".  Read closely into that "or changed" because there's a lot of meaning in those numbers.

First of all, a relatively few of us know that you indeed do have a specific and comprehensive plan as an alternative to Obamacare.  You seek to restore personal choice to a person's health care options.  In doing so you are offering tax vouchers back to the consumer so that he can go out and buy the exact health policy he wants; if he doesn't need medical coverage for birth control pills or abortion he doesn't buy it.  If he doesn't have AIDs he need not elect the expensive coverage.  If he's willing to pay a reasonable co-pay, and willing to accept some of the risk of developing a serious disease he can expect to pay lower premiums.  BUT! You's better have a mandate that pre-existing conditions are covered and you'd better open up the health care provider market across state lines so that there can be real competition in order to drive premium costs down.  AND you'd better be prepared to restore the $700 billion to the Medicare Trust Fund that Obama stole from senior citizens.  They paid for that trust fund over half a century of paying Medicare taxes.  Most of all you'd better be ready with the savings numbers realized by firing those two million federal and state bureaucrats who are eating up fully a third of healthcare premiums being paid in...just to fund the bureaucrat whose been given the power to tell you what health care we can have..and not have.

And finally, you better have every Republican candidate with briefing charts on your alternative medical plan...and you better tell them to flip those charts at every campaign rally...cause if not the Democrats are gonna be saying you have no alternative to Obamacare.

If you want to court the Hispanics and begin talking about legalizing some 30 million illegal Mexicans, well more power to you...but you're gonna lose the election if you do because y'all out there in Washington are severely underestimating the opposition to illegal amnesty.  Even if the 20% hardcore opponents opt to sit on their ass come election day, you lose.  So you go ahead and keep kissing up to the 15 or 20% of the Hispanic population (who won't vote for you anyway) and you'll lose a good 20% of your most ardent supporters.

This should be an easy one...one you can knock right out of the park.  The Dems cannot win this one.  They can talk all they want about a lower unemployment rate but there are some ten million Americans who left the work force since Obama took office..and Democrats took control of the Senate and block every House bill...folks who just gave up trying to find a job.  No one is going to be buying the Democrat's lies on this one.

It is not enough that you Republicans go into a national snit fit once a year and threaten not to extend the debt ceiling.  We all recognize that's just a political ploy.  No...we'll know you're serious when you absolutely refuse to vote on an annual budget that carries with it a trillion dollars in deficit spending.  We saw you cave this past year when you abandoned sequestration...that mandatory reduction in spending, and cut a deal with Democrats so that you could each fund your favorite little programs.
You better come up with a serious budget come late summer and you better stick with it or we'll just know that you're no better than liberal Democrats at living within a budget.

Very accurate list of objectives that need to go viral.People need to realize, when it comes to govt. shutdown and the budget, the govt. shuts down every Friday for the weekend,the country is still here on Monday.Happy days.

Craig, I would love everyone who reads this to forward it on to their Congressman and Senator.

Have a good weekend.

Republicans: The party experienced at snatching defeat from the jaws of victory.

Anon...you said it! Here's one I simply do not understand. The Republicans might, just might be able to pick up an extra 5 or 10% of the Hispanic vote just by passing a bill introduced this week that would have given citizenship to young folks brought here as children...IF they would agree to serve in the military. Well the hard-ass right wing fringe killed it! ..and killed any chance of getting one drop of Hispanic empathy.

I've said many times if a an illegal is willing to go through four years of stress and sacrifice and risk his/her life they deserve to be made citizens.

But,nope, the hard asses would not allow the bill to come to a vote, even though it was just citizenship in trade for military service. I was dumbfounded to hear it.